But 30 other schools in Ganze are much worse off, says MP Mwambire

• Children usually learn outside under trees but during torrential rains in Kilifi they had to shelter in what passes for a classroom.

• Shocking photo emerged on social media, causing an uproar. No money to rebuild. 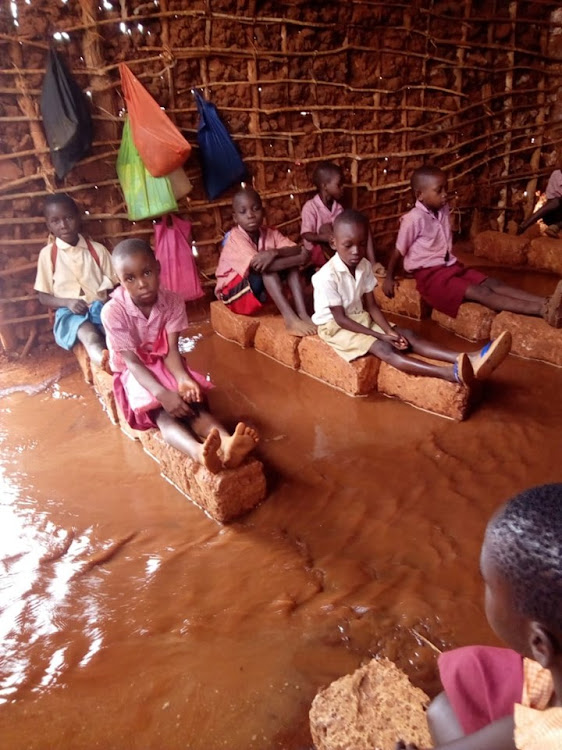 SWAMPED: Students at Mangororomu Primary school in Ganze sit on blocks as their classroom is filled with rainwater on Wednesday. Thirty other schools said to be worse off
Image: COURTESY

Barefoot pupils sit on stone blocks as muddy rainwater swirls around them in a leaking mud-wall classroom that appears it could collapse at any time.

But 30 other schools are much worse off in Ganze constituency, Kilifi, says MP Teddy Mwambire who represents the impoverished area.

There's no prospect of rebuilding in the immediate future for those pupils sitting on stones at Mangororomu Primary School and elsewhere.

Other projects have priority. CDF funds haven't come through, though the fiscal year is ending.

Pupils from three classes learn under trees so when it rained we had to combine them in classrooms. We have no option but to suspend learning every time it rains.

On Thursday learning was interrupted for the second consecutive day at Mangororomu.

Photos of those students in that 'classroom' surfaced on social media, causing an uproar.

A teacher at the school, requesting anonymity for fear of reprisal, said they were forced to suspend classes so students could take shelter. The children usually learn outside, under trees.

The mud-wall building where the students took shelter is for Grade 1 and Class 5.

The school has two permanent classrooms and three temporary classrooms.

"Pupils from three classes learn under trees so when it rained we had to combine them in the classrooms. We have no option but to suspend learning every time it rains,” the teacher said.

The situation is expected to worsen as rainfall is predicted to intensify at the weekend.

The water has subsided, for now, but the rooms still cannot be used for learning.

"It has started drizzling and we fear the building could collapse if the rains continue. We have been appealing for infrastructure development from stakeholders but we have not received any support," the teacher said.

On Thursday, MP Mwambire was accused by residents of paying more attention to politics than developing the constituency.

Many people asked how he could attend a radio talk show in Nairobi but fail to visit the flooded school.

He blamed the previous leadership for the mess in the constituency.

“I am grateful to see Mangororomu Primary School has been highlighted in social media to prove the challenges we have in Ganze," Mwambire said.

To date, he said, he has not received the 2018-19 CDF allocation for development "because of mistakes by my predecessor".

He posted on Facebook that he was making "great strides" in sorting out the problem with the CDF board.

But the situation at Mangororomu will remain unchanged as there are no infrastructure funds, Mwambirre said.

Even the 2019-20 budget will be used to complete projects started by his predecessor. They require Sh65 million.

"I urge parents in affected schools to look for alternative ways to improve the situation,” the MP said.

In March and April, roofs in six schools in the constituency were ripped off by high winds.