LIVED THERE SINCE INDEPENDENCE

Says ADC has sold all land to private developers; three lawmakers says residents should get back land

•They say the land is now idle; squatters since independence 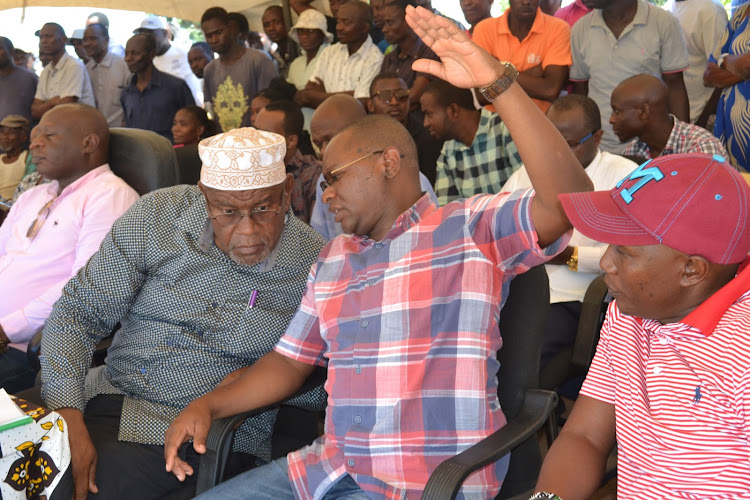 Residents of Sabaki within the Agricultural Development Corporation Kisiwani farm in Magarini want the state to give back 900 acres given to the parastatal.

They said they had been squatters since independence and were evicted to make way for agriculture and livestock rearing. They said the ADC had failed to utilise the farm and instead sold it to private developers at their expense.

They spoke on Saturday during the hearing of a petition filed by Magarini MP Michael Kingi that prompted the Parliamentary Lands Committee to tour the area to help find a permanent solution.

The public hearing was also attended by top officials from ADC, the National Lands Commission and the provincial administration.

During the hearing, it emerged that all the 900 acres, including the land with the ADC offices, were sold to private developers and influential people in government by a former managing director.

In an earlier meeting during a courtesy call by Malindi deputy county commissioner Kamau Karungo, the ADC managing director pleaded with the committee to push for allocation of the land to the corporation.

The move was rejected, however, by the three legislators from Kilifi who demanded that all titles allocated to individuals be revoked and the land be given back to the residents.

Kingi said ADC was to blame for the injustices done to the residents of Sabaki and should not be allowed to take over the land.

“The ADC has failed in its mandate as they are protecting the tycoons who bought land instead of helping the residents,’’ he said.

Kingi said there is a lot of corruption within the ADC and called on the authorities to ensure culprits are brought to book.

Witnesses who testified before the committee narrated how their land was taken back since the pre-colonial era before falling into the hands of the ADC, who are still on the ground despite the land being sold illegally.

Kahindi Charo, an elderly man who was born and brought up on the ADC farm, said he used to live there with his grandfather before they were evicted without any compensation.

“ADC came with false promises that they would train us in farming and cattle rearing. They said our local breeds would be changed to high-yielding breeds,’’ he said.

Charo even showed mango trees which belonged to his family, but they have no access to them.

Kavumbi Karisa Kazungu said the land was first taken by a British missionary who built a school and a church, and later by a colonialist before he gave it to ADC.

Stembo Kaviha produced documentation on how the land was sold out and even revealed that there are other 3,800 idle acres at Kisiwani top farm.

He said ADC took over the land in 1974 but has since gone bankrupt as there is no activity on the farm and all of it belongs to private developers.

Baya and Mwambire said the residents deserved to get back their land and promised to push for justice.

Mwinyi promised to ensure fairness to the people.

“We will go through the statements and come up with a report with recommendations,’’ the Changamwe MP said.