THEY JUST WANT TO GO HOME

The thousands of people were displaced from their homes during the war in 1960s.

• The plan is to have all idle land in the region identified, demarcated and each squatter allocated a title deed. 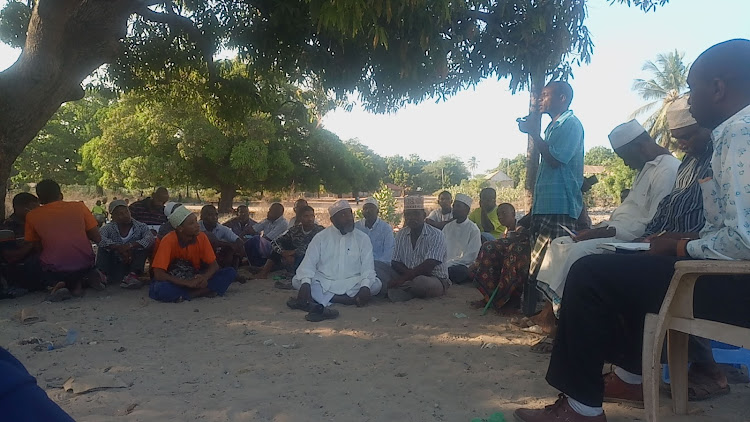 Shifta war squatters in Lamu have opposed a plan by the county government to resettle them and want the ongoing land surveys stopped immediately.

The thousands of people were displaced from their homes during the war in 1960s.

Last year, the county government of Lamu commenced plans to resettle at least 20,000 squatters in the region in the next four years.

The plan is to have all idle lands in the region identified, demarcated and each squatter allocated a title deed.

Lamu governor Fahim Twaha said already land surveys and demarcation has commenced in some of the lands that have so far been identified in Pate, Kiunga, Mwambore, Mokowe, Kiangwe, Kiwayu and Faza.

The objective of the entire resettlement programme is to reduce the already bloated population of squatters and landlessness in the region in the next four years.

Speaking when they met in Lamu town on Thursday, the squatters asked the county government to immediately stop the survey of the resettlement lands as they had not been consulted or involved.

They said the exercise was corrupt and was also shrouded in secrecy.

They accused the county government of neglecting them.

The squatters want the national government to reveal the findings of the Truth report that documented the entire phase of the war and also carry out the recommendations as directed.

Their spokesperson, Mohamed Mbwana, said the report has never been made public years after the war and that it would only be prudent for the world to know what exactly caused the Shifta war and all other details.

He said the government owes the Shifta war squatters in Lamu an apology for all the years that justice has been delayed.

The squatters have vowed not to allow the resettlement plans by the county government until the national government compensates every single one of them for all the losses incurred during the war.

“We wont allow that survey to go on because we know people want to take advantage of our situation.We want the TJRC report made public,then we want to be compensated for all we lost and finally we need an apology for the justice we deserved but never got for all these years,” said Mbwana.

The squatters also wondered why the surveys of their villages was ongoing without their presence or involvement.

“If we aren’t there yet they claim to be doing it for us, it leaves a lot to be desired,” he said.

They are demanding to be taken back to their initial villages instead of being resettled elsewhere.

“The government should just rebuild our homes and clear the bushes so that we can just go back to where we lived before the war came. We don’t want to be resettled as we understand the process is corrupt and not genuine,” said Tima Amin.

The squatters said they had no faith in the exercise with many of the individuals involved in the resettlement drive adversely mentioned in land-grabbing incidents in the region.

They threatened to head to court to stop the exercise if the county government fails to respect their stand.

“We don’t want anything to do with what the county is doing. Anyone claiming to help us must first meet us and listen to us and if they do so, they will understand that we all want to go back home and not be resettled,” said Mussa Kale.

Post a comment
WATCH: The latest videos from the Star
by CHETI PRAXIDES Correspondent,Coast Region.
Coast
06 April 2019 - 00:00
Read The E-Paper