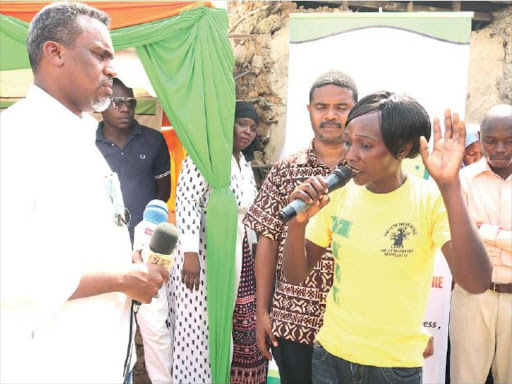 Human rights defenders warned violators, including police, saying their actions will be scrutinised.

They said the center will focus on victims of police torture, with extra attention to extrajudicial killings.

It will also look into social issues like land grabbing.

Haji said his office will support the center and give voice to victims of extrajudicial killings and police torture. He promised to prosecute officers found guilty of killing innocent youths. He also warned perpetrators of illegal evictions.

“Any victim of illegal eviction should get their documents ready. I will be back in a short time to investigate the evictions in slums,” Haji said.

Changamwe Social Justice director Seif Suleiman said it will be run by a committee selected by the community. They will be responsible for cases in their villages.

“That will make services more accessible considering the negative attitude of most slum dwellers towards the government,” Suleiman said.

He said the distrust had contributed to the high number of cases that go unreported.

The center will also act as a link between residents and authorities. Committee members will be expected to forward their grievances to the security agencies for follow-up.

Residents will be educated on their constitutional rights. Most have zero knowledge about their rights, Suleiman said. He said key cases will include land injustices, torture and harassment from the police, and forceed disappearance.

The Changamwe centre becomes the 16th countrywide. They include others in Kibera, Dandora and Mathare areas of Nairobi.

Scores of others, including a seven-year-old girl were injured by police under unclear circumstances.

“The rising cases of police killings are worrying. We’re not against fighting crime, but we’re against killing people,” Khalid said.

He said they will also document killings and torture by individuals, not necessarily police.

Resident Maureen Wangari said she had been living in a tent with her family for five years after they were evicted from their land.

“No action has been taken so far yet we’re often stranded whenever it rains. The government should intervene,” Wangari said.

The center will depend on donations and contributions from well-wishers to fund its activities.

Haji promised to donate “some amount from [my] small salary” to the center, and also look for donors.nd donate towards the growth of the center besides looking for donors.