Students at risk of terror as universities’ security relaxed 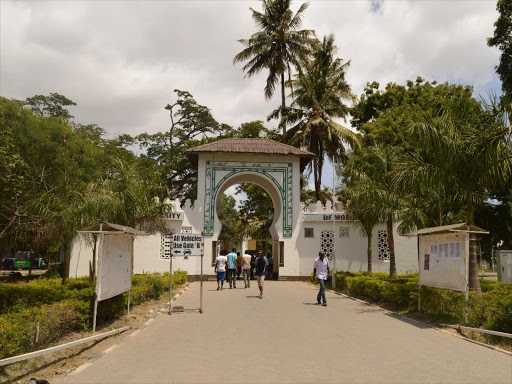 A file photo of the entrance to Technical University of Mombasa. /JOHN CHESOLI

The government has commendably put counter and preventive measures in and outside the country’s borders.

But the same cannot be said of security situation in institutions of higher learning at the Coast where thousands of learners are at risk of terror threats.

A spot check by the Star at universities and colleges in and around Mombasa exposed vice chancellors, college principals and boards of directors as lax and unprepared in case of terror attacks.

All this despite heightened alerts in the coastal city. Learning institutions have a lot to answer for in matters of safety and preparedness.

Fist fights and bullying comprised insecurity at learning institutions in the past, but today’s students face more serious threats ranging from shooting to terror attacks.

At the Technical University of Mombasa, the biggest university with the main campus at Tudor, one can easily smuggle a lethal weapon like a gun or an explosive device.

The main gate has limited and isolated luggage check-ups. One can easily enter with a pistol or a grenade undetected. Guards sit under shades and chat away as students and outsiders enter and leave the institution at will.

Two years ago, the security personnel used metal detectors to search students and visitors at the entrance. Today, the gate resembles that of a rural home - a simple metal gate which is painted occasionally.

The administration in the past intended to introduce smart IDs to identify students. The process began some years back only to be discarded.

TUM communications manager Salim Chiro told the Star that they raided the premises after realising that fake IDs could be used by terrorists to enter.

Many security lights don’t work.When part-time students attend evening classes, the only proper lighting is inside the lecture halls.

You can easily walk with a pistol in your hand at the graduation square, playing grounds, assembly hall, pathways and WiFi hotspot undetected.

The institution had installed high-tech poles for security lights which only worked for a few weeks.

“I have never seen them working…we are just used to live in darkness at night,” a resident first year student said on condition of anonymity. Earlier this month, police pursuing criminals fired gunshots outside the main entrance, prompting students to scatter for safety.

“I thought they (al-Shabaab) had finally come for us,” a student said.

There isn’t a single surveillance camera at the main entrance, faculty blocks or entertainment spots.

In October 2017, gunmen killed two TUM staff members who were escorting a students’ bus from the hostels to lecture theatres at TUM’s Ukunda campus, Kwale.

A policeman and a driver were also injured in the attack. Al-Shabaab militants have been staging attacks and recruiting new members in the county.

At Kenyatta University’s Mombasa campus, the scanning machine at the gate stopped working two years ago.

Have been a target before

A police report last year showed that 58 university students had left the campus to join terror groups in Somalia, Syria and Libya over the past three years.

Kenya’s worst terror attack since the 1998 US embassy bombing in Nairobi happened at Garissa University College on April 2, 2015. The terrorist killed 148 students and left more than 70 injured.

Terrorists have in the past targeted nightclubs, police stations and vehicles, churches, religious gatherings, a downtown building of small shops and a university.