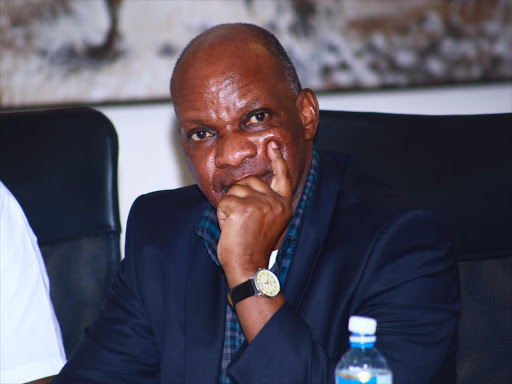 Did former Coast coordinator Nelson Marwa cause Mombasa speaker Harub Khatri to lose two lovers, any chance of matrimony and damage his business?

That’s what Khatri says in his defamation suit against Marwa, who now is Principal Secretary for Labour and Social Protection.

Khatri said in court on Tuesday that Marwa’s remarks captured on videotape “have denied me the opportunity to quit bachelorhood, as no woman wants to associate with me ....

“I have lost two lovers after they read negative things about me on the internet. No one would want to associate with a man linked to illegal businesses,“ he said. Marwa had a controversial tenure, marked by blunt speaking and harsh words, which have come back to haunt him.

Mombasa assembly speaker Harub Khatri, who sued Marwa in 2017 for defamation, says his name was tarnished and reputation damaged when Marwa produced videos in which he linked him to narcotics and illegal gun possession.

The videos, extracted from the Star website, showed a press conference in which Marwa also said Khatri was wanted by Interpol.

On Tuesday, the court allowed the videos to be admitted as key evidence in the suit against Marwa.

Judge Dora Chepkwony said they will be considered because they were produced by the aggrieved party. Chepkwony dismissed Marwa’s petition to have the evidence expunged.

Marwa said the law does not allow admission of videos taken by unknown persons.

However, Khatri said the extracts were taken from a reputable newspaper with an online platform, and therefore they were genuine.

“The witness confirmed the source of the media materials and the law allows for the inclusion of such evidence,” Chepkwony said.

Khatri has accused Marwa of tainting his name, making him lose business.

Police officer Kipkemboi Rop said the former regional coordinator defended Marwa and said he did not speak the words at a personal level.

Rop said the PS spoke as a state official on behalf of the regional security committee which he chaired.

“Whatever he addressed in that press conference was agreed during the committee’s meeting and therefore he could not be held responsible for the utterances as an individual,” Rop said.

The officer also denied claims Marwa called the speaker names, saying his former boss was only clarifying allegations made by Governor Hassan Joho that he had been arrested.

Rop told the court police had raided Khatri’s house in Ganjoni where they retrieved three guns. He said the raid followed intelligence that Khatri was illegal holding an AK-47 assault rifle.

He said they took Khatri to the police station to verify the authenticity of the certificate of gun ownership he had produced.

“It was while we were verifying the gun’s certificate that Joho stormed the station and later sent a Twitter alert that he had been arrested. That was the rumour that Marwa talked about,” Rop said.

Both parties have closed their cases, awaiting submissions on June 20, before knowing the outcome.

Marwa previously applied to be expunged from the suit, arguing that he could not be sued for making remarks while in the line of duty.

However, the Court of Appeal ruled that the PS must take personal responsibility and answer to the charges.

The three-judge bench said the government could not be liable for defamatory remarks made by its employees.

Post a comment
WATCH: The latest videos from the Star
by MALEMBA MKONGO
Coast
14 February 2019 - 00:15
Read The E-Paper