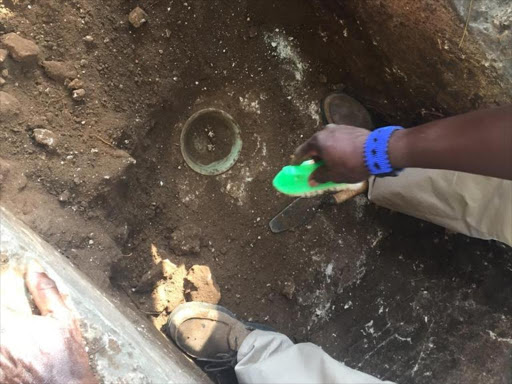 A 13th Century mosque has been discovered at Mama Ngina Waterfront Park.

The discovery was made by excavators digging at the site of the Sh460 million beautification project.

The National Museums of Kenya said workers from Suhufi Contractors stumbled on stone work at the site and they had to stop and consult.

The discovery, the Star exclusively learnt, has unearthed rich historical materials, signifying a major breakthrough to scientists and researchers. The artefacts include pottery, bones, metals, beads and stone tools.

Two large areas at Mama Nginahave been cordoned off.

President Uhuru Kenyatta last month commissioned the project and directed that the land be reclaimed and all grabbed parcels be repossessed.

The NMK says part of the discovery will be aligned to the timelines set by the President of having the park operational in five months.

On Monday, the Star witnessed the excavation of items that could turn around to the beautification project.

The mosque, a few metres from the Likoni ferry crossing, will make Mama Ngina not only a cultural, military and aesthetic front, but a spiritual one as well.

Coastal region NMK keeper of heritage Athman Hussein said the place will become a unique recreation centre in Africa as it will combine leisure, culture and interaction of the original ruins of the 13th Century.

The NMK will team up with Prof George Abungu, from Abungu Heritage Consultancy, who was called to assess the area and the discovery. Abungu is an archeologist.

In the near future it is expected that Mama Ngina will be among the most popular sites in Kenya. It is projected to attract more than two million visitors annually.

Abungu told the Star at the site on Monday, “We are trying to locate the kibla [direction Muslims face during prayers], since we already have seen the celadon [pottery] that was in the cistern. We did a preliminary walk and found scattered evidence of stones that made us begin surveys.”

He said the excavation started on Friday and on Saturday there were major findings. The discovery included the celadon, three stairs at the mosque and ablution area.

A few metres away, they found more pottery, bones, metals, beads, a small pot believed to have been for burning incense, stone tools and embedded shards.

The celadon, which is bowl shaped, and green in colour, has a circumference of about 10cm.

The depth of the cistern on Monday when the Star visited the area, had been excavated to about 50cm from the top of the wall and a width of about 40cm.

The extraction work at a nearby site where the mosque was discovered is going on. The NMK has dug four trenches, between 10-50cm deep. They will eventually be covered with glass tops and information panels placed on them.

“The early inhabitants of these places must have been good in natural remedies since their designs are mostly built using lime and coral,” Abungu said.

“The unique porcelains we have recovered at the site is a pointer the area may have been inhibited by people who were well-off as some bowls and materials are associated with rich people like the Sultan. They [bowls] could break and burst when poison was put in food and served in them.”

The celadon, commonly used in the olden days was to ensure the water levels from the borehole was the correct one.

It also enhanced water purity since fish was placed inside them to eat any impurities and parasites like mosquitoes.

“It is one of the most important finds we have got. Celadons are prestigious items used by kings and sultans, and those associated with royalties. This beauty has stayed there - intact - for over 800 years until we found it two days ago,” said Abungu.

The team said the discovery of the celadon and most remnants at the mosque were complete without any reconstruction, making it unique since most have to be reconstructed.

“Mama Ngina has so many qualities, so many layers of history, like the Swahili, Portugese, Arab, British and Kenyan. We are creating another very important layer that will turn the sleeping park into magnificent area where we can be able to write the history and tell stories that people can associate and identify themselves with,” Abungu said.

According to the NMK, there were nine Swahili tribes living in the sparsely populated area, due to existence of forests. They were later pushed towards Allidina and the Coast General Hospital after Portuguese invaded.

The area is the foundation of Mombasa dating back to the 9th Century. Various archeologists from the NMK, including Abungu and Prof Hamo Sassoom, say the area may have been abandoned due to attacks by the Portuguese or a disease outbreak.

“When we first examined the stones at the mosque, we thought it was a fallen wall but on close observation, two metres on the eastern side, we noticed the smooth stones that are usually used by worshipers to cleanse themselves before prayers,” Abungu said.

The NMK has drafted an excavation work-plan, including the duration, areas to be covered and to open it up for the masses.

The baobabs at Mama Ngina are indications of graves. In 2008, there was a proposal that a children’s park be put up in the area, but it ended up badly as those digging ignored advice from the NMK not to dig beyond 20cm. They stumbled on hundreds of skeletons. There was an uproar and the project was shifted to another site within Mama Ngina.

Another mosque constructed in the late 1990s still exists.