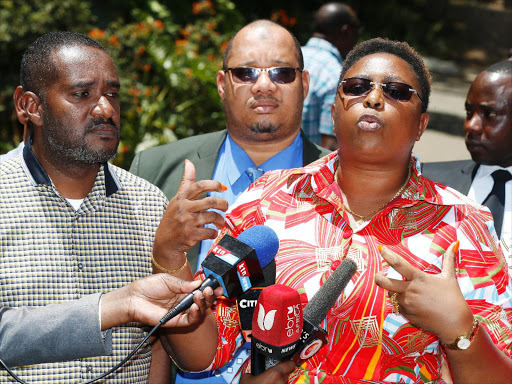 The two MPs have declared war on Joho and blame him for their woes in ODM.

Last week, the party’s National Executive Council adopted a disciplinary report that recommends that they be expelled for continuing their campaigns for DP William Ruto’s presidential bid. They appeared before the council and called for forgiveness before accusing Joho of masterminding their trouble.

In response, the governor said he would not be bogged down by junior politicians. His allies swiftly joined the fray, but they prefer to attack from behind the scene.

Yesterday, a group of MCAs warned Dori and Jumwa against attacking the county chief. While some preferred a bare-knuckle onslaught, the majority felt that would only work to the MPs’ advantage.

They do not want to take any measures that might raise Jumwa’s and Dori’s political profiles, promising to take the battle online and attack their integrity.

The group has tasked the youth and women at the grassroots to do their bidding. Bloggers will lead the social media offensive.

“Nobody will respond to them. These people are nonentities. They are trying to pick a fight with someone who is way above their league,” nominated MCA Moses Aran, alias Civiliser, said.

Another nominated MCA Fatma Kushe, who is a staunch Joho supporter, on Monday told the Star they will do all it takes to defend the ODM deputy leader.

“We’re ready even if it means going door-to-door to talk to individuals,” she said and accused Jumwa of shaming Coast women.

MCA Milka Moraa said responding to Jumwa and Dori would turn them into heroine and hero. She said they will not give them the platform they need to raise their political stakes.

“She [Jumwa] is about to find out the power of social media and computer nerds,” Moraa told the Star by phone.

“By answering her, we would be stooping low to her level. Joho is the one who made that woman.”

Likoni MP Mishi Mboko and allied legislators will pull the strings from behind. She has previously called for party discipline. Kilifi Governor Amason Kingi also wants the party respected and has warned the rebels to shape up or ship out.

However, Kilifi North MP Owen Baya on Monday warned ODM that expelling the two colleagues would weaken the party. He cited perceptions that the region has been mistreated. Any action against its leaders, he said, would strengthen the perception.

“At the national level, we had the chief whip position, but it was filled by someone else. We had the secretary general seat, but it’s no longer with us. This is the first time since independence we don’t have a Cabinet Secretary from the Mijikenda,” he said at Mkwajuni.

Nominated Senator Agnes Zari (from Kilifi) acted as ODM secretary general after Ababu Namwamba quit in the lead-up to the 2017 elections. Edwin Sifuna eventually assumed the mantle, but Baya is aggrieved.

“If you have a problem with your son, you don’t lock him out. You call him and advise him because if you let him go, he’ll join other people and attack you. You’ll have destroyed your house. Let ODM do the same and warn these people,” Baya , who had also flirted with the DP, said.

Yesterday, political analyst Mwakuja Mrombo said Jumwa has built a huge support base and is becoming a powerful MP in Kilifi.

He urged the orange party to go slow on its disciplinary measures.

The party National Governing Council, the final decision-making organ, will next month decide whether to have the two expelled. In the meantime, NEC ordered that they be removed from House committees.

Will there be by-elections? “Allowing talk of a by-election may be construed to mean a decision has been made, thereby making the NGC sitting a PR exercise,” Mrombo said.

Mrombo found it curious that other Kwale elected leaders have kept mum, adding that Dori could be enjoying their support.

On Saturday, the lawmaker said he would win in a by-election.