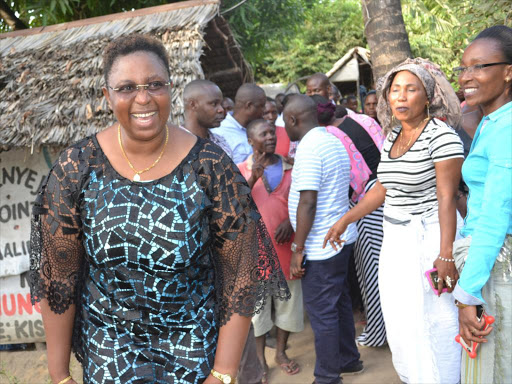 A war pitting Mombasa governor Hassan Joho against his opponents is undermining efforts to unite the Coast region.

Malindi MP Aisha Jumwa has declared she will fight Joho over what she claims are his plans to frustrate her political career.

Jumwa and her Msambweni counterpart Suleiman Dori, face expulsion from ODM after the party’s National Executive Council recommended the disciplinary committee to kick them out.

They violated party instructions not to support Deputy President William Ruto, whom they back.

Their survival in ODM now lies with the Orange party National Governing Council.

Jumwa is prosecuting the war against Joho.

In Kwale, a defiant Dori said he will still win in any by-election if the Orange Party’s NGC decides to expel him.

“Leadership comes from God. It is only he who can decide if I will still be re-elected,” he said. Dori spoke on Saturday at Nyumba Mbovu, Kwale, during a fundraiser in aid of Kinondo ward women’s group.

Political observers say Jumwa and Dori are pawns in a bigger political war pitting Joho against DP Ruto who is campaigning for President.

Joho has declared interest in the presidency and potentially could run against Ruto. The war threatens Joho’s ambitions but could work in Ruto’s favour.

“It is like Joho is saying to Aisha, ‘You are from the Coast and you support Ruto instead of me, let us see what will happen’. That is the war,” she told the Star on the phone.

She is leaning towards Jumwa, saying Joho should concentrate on Mombasa politics before extending to other counties.

“Joho is my son and I like him. He should leave Kilifi to us,” Cidi said.Kilifi leaders have told Joho he will need the county in his ambitious plans to run for presidency.

“If he steers clear of Kilifi politics, we will support him in his endeavours in Mombasa,” Cidi said.

She said a presidential candidate must have a constituency. Joho’s constituency is the Coast region. “Joho must come and join hands with all the leadership of the Coast. He has no choice. He cannot seek the presidency alone,” Cidi said.

But leaders allied to Joho have dismissed threats by the Kilifi leaders.They say Jumwa is seeking sympathy by dragging the governor’s name into her problems.

They have pledged to counter any attempt to de-popularise the party or soil Joho’s name. Ganze MP Teddy Mwambire said to dislodge ODM from the hearts of Coast residents is a task that cannot be achieved in this or the next generation.

“The plans will be their grave,” he said on Saturday. Mwambire said “wild allegations” against Joho won’t earn them sympathy. “They are not speaking for the masses,” he said.

Joho, according to sources close to him, will use MCAs to counter attempts to tarnish his name or that of ODM.

MCAs from Mombasa, Kilifi, Kwale, Taita Taveta and Lamu have reportedly received instructions to form groups and identify areas of which they will be in charge.

“For now we are calm, listening to them. We are waiting for the by-elections in Malindi and Msambweni. That is when we will roll out our machinery,” Joho supporter Moses Aran said.

He will be in charge of the youth wing of the party and the counter campaigns. Aran is a nominated Mombasa MCA.

“Their plans to de-popularise ODM are laughable. They should resign first and we go for by-elections. ODM will win even if we nominated a chicken to run against them,” he said.