Matiang’i admits police brutality and promises to end the cruelty 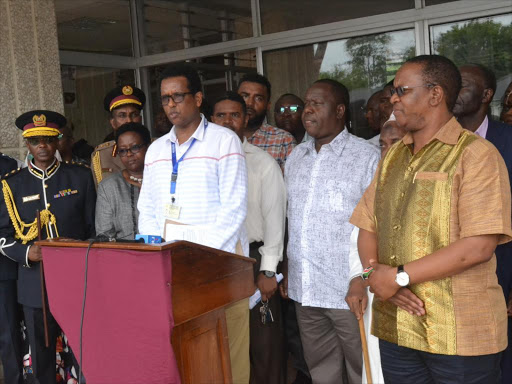 The government will stop reckless shooting and killing of suspects at the Coast, Interior CS Fred Matiang’i has promised.
“We shall have respect for the rule of law and the lives of citizens of this country,” the CS said.
Rogue police officers will be reined in, Matiang’i told a high-level security meeting on Tuesday. “No one is above the law.”
But the CS

complain of rampant killings by the police. Victims include youths and criminal suspects.
Data released by the lobby Muslims for Human Rights shows that 71 people have either been killed or


Others at the meeting were Director of Criminal Investigations George Kinoti, Director of Public Prosecutions Noordin Hajji and Interdependent Policing Oversight Authority chairmperson Ann Makori.
Muhuri executive director Hassan Abdille told the Star that 34 people had been killed and 37 had disappeared.
Mombasa had the highest cases of killings at 18, followed by Tana River ( 5 ), Kwale ( 4 ), Lamu ( 4 ) and Kilifi ( 3 ).
Abdille said 17 people disappeared in Tana River, Mombasa ( 9 ), Lamu ( 6 ) and Kilifi ( 8 ).
“We need to put an end to this. We are happy by the consultative approach the government has taken,” he said.
The CSOs said postmortems showed that some shootings were done at close range, meaning the the police had the option to arrest the suspects.
Assurances to end extrajudicial killings have been made by the government in the past but not much is done.
Families of the police victims continue to cry for justice.
But Matiang’i was categorical that

security will be well-managed through open consultations.
“When there will be a mistake, we shall openly resolve it. We should also avoid condemning the police service. The least we can do is to support them,” he said.
The CSO representatives were concerned that the government was

clamping on civic space.
In 2015, Muhuri was among more than 60 groups accused of sympathising with al Shabaab and its


However, a court ordered Muhuri’s accounts unfrozen after finding no evidence to link it with the militant group.
Matiang’i said his position on the lobby has changed. “Two years ago if you mentioned Muhuri at Interior Ministry, there was none who would have wanted to sit down with them. But today I will and must consult Muhuri on a daily basis,” he said.

the victims
Boinnet, while calling for collective responsibility, said police action will be guided by the law.
Hajji said the law will be applied equally in prosecuting criminals, even rogue police officers. “All are equal before the law,” he said.
IPOA boss Makori said the devolution of the national policing forum will help her team to investigate and conclude cases faster. “Kenyans should be dissuaded from attacking police,” she said.
Abdille said all police killings must be investigated.
Last September, Hajji promised killer police officers will be prosecuted. “If evidence links the killings to any officer, they will be punished.”

The DPP, who was speaking at Haki Africa offices, promised a strategy to deal with the incidents. “Victims of police killings must get justice,” he said.
Early this month, IPOA said the file of Katana Kazungu, 16, who was shot dead by police in Kaloleni was at the DPP’s desk awaiting arrest orders.
Kazungu was a Standard Seven pupil at Ndatani Primary School. He

died when police allegedly shot at a crowd that was pushing a vehicle stuck in mud after a downpour.
Other young people killed in Mombasa include Juma Kitsao, 17, who was shot on September 6, and Kenga Ramadhan aged 18.
Recently, the police killed Shafi Salim Sahif, 23, whom they clamed was a dangerous criminal. `but witnesses said he was unarmed and could have been arrested.
Hussein Khalid of Haki Africa said the killings happened under the guise of fighting crime.
“We are concerned about the killings by the police and the numbers are worrying. We are not against fighting crime; we are against killing people,” he said.
There have been concerns that some of the victims were members

of criminal gangs used for
political ends.
Mombasa governor Hassan Joho said the insecurity problem dates back to his days as Kisauni MP. “I talked to residents and told them that they had a responsibility.”

Post a comment
WATCH: The latest videos from the Star
by ERNEST [email protected]
Coast
23 January 2019 - 00:15
Read The E-Paper