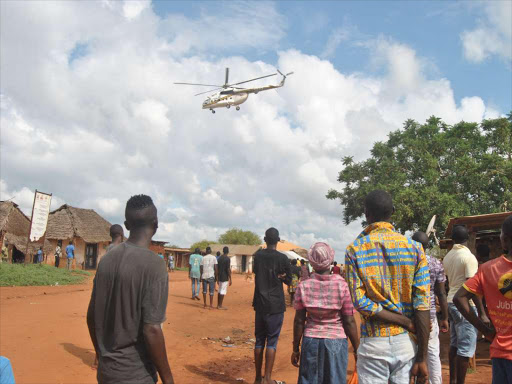 The Italian aid worker who was abducted by gunmen in Kilifi is still alive, Italy’s government and media say.

The kidnappers are reportedly holding Silvia Romano with the intention of demanding a ransom.

Reports from Italian media indicate there could be ongoing secret negotiation initiated by the government of Italy.

On Monday, Italian public broadcaster Rai TV showed pictures of plaited hair that had been recovered from Dakatcha woodland forest. The woman who last plaited the Milele Onlus corporate affairs officer in Chakama confirmed they are the ones.

However, what the authorities fear is that Romano could be sold to al Shabaab militants in Somalia.

A team of journalists from Italian TV stations and newspapers are in Malindi covering the abduction.

One of the journalists from La Republica newspaper Raffaella Scuderi said Italy’s deputy prime minister and minister for home affairs Matteo Salvini addressed the nation on Sunday saying they were happy to have good news about Romano.

Salvini confirmed that investigators were tracking the kidnappers and that the aid worker was still alive.

“We believe there is a deal going on since they intercepted the calls between one of the kidnappers and the wife,’’ Scuderi said.

However she said the Italian government would not admit such reports of negotiating to pay ransom like in previous incidents.

Back in 2004, an Italian woman called Simona Simona was kidnapped in Iraq and in 2014 another one called Gretta was abducted in Syria.

“The social workers were freed but the Italian government did not reveal how they were freed and denied having paid ransom,’’ she said.

News broke out in Italy that Romano had been abducted by al Shabaab, but the following day the leads changed to kidnapping by local herders.

“At first news in the Italian media were pitting Italy against al Shabaab because Italy has a big number of soldiers training in Somalia,” she said.

The journalist said she met Coast regional police boss Noah Mwivanda who told her Romano was alive, adding that police were reaching all the kidnappers.

She said reports which have not been confirmed indicate that there are Special Forces from Italy popularly called Carabienieri involved in the search.

Romano reportedly first worked at an NGO in Likoni Mombasa before relocating to Chakama.

In November, the Italian aid worker signed a contract with Africa Milele Onlus to work in Chakama until March next year.

Immediately after the abduction, tan editorial in Courier Delasera, an influential newspaper in Italy, questioned why Romano came to assist people in a remote village of Kenya while even in Italy there were people who needed help.

Scuderi said the editorial blamed Romano and talked badly about her, that she knew she was going to a dangerous area in a remote village.

It is then that a country-wide debate ensued with many criticising her and the NGO for which she was working, a small organisation that helps in health and education.

To date it is not clear whether the kidnapping was personal or targeted at the Italian government.

Currently, an operation is going on in Tana River and Lamu counties. Police believe the kidnappers intended to cross over to the vast Boni forest to Somalia. Security personnel are very cagy in giving updates of the operation and more often Mwivanda would decline to pick calls or respond to messages.

However he has been seen to be updating one TV station and also according support to the Italian media.

They placed a Sh1 million bounty for anyone who would help locate the kidnappers.

The suspects according to police are Ibrahim Adan Omar, Yusuf Kuno Adan, and Said Adan Abdi.

A wife of one of the suspects together with his in-law was arrested in Tarassaa area of Tana delta and are being grilled.

The breastfeeding mother who has a week old child was arrested after police intercepted her talking to the husband.

Security personnel are using drones to track down the attackers believed to be in Tana River.

Security personnel comprising of military, police and KWS with Special Forces are in the forest pursuing the suspects. The attackers had rented a local lodging three days earlier, less than 20 metres from Silvia’s house. The village is in a remote area, more than 80km from Malindi town.

Residents had told journalists that Silvia was barefoot and was dragged by the abductors despite pleading for help from the villagers. The caretaker of the guesthouse Malik Gacambi said he rented out a house to a man named Said Abdi Adan from Tana River county three days prior to the attack, but two others joined him later.