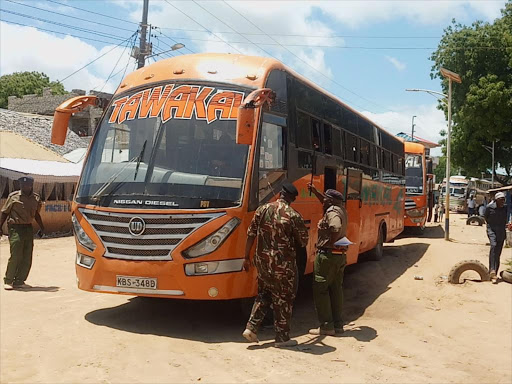 The security administration in Lamu has rejected a plea by Lamu residents who had requested to be allowed to travel without fastening their seat belts.

The residents claimed that the seat belts would make it hard to quickly free themselves in case of an attack by Al Shabaab militants in the area.

Lamu County Police Commander Muchangi Kioi insisted that no single traffic rule shall be flouted by any vehicle on the road.

Speaking in his office on Thursday, Kioi said the residents' pleas were not only outrageous but also risky and dangerous in case a vehicle was to be involved in an accident.

He said security in Lamu had been contained and termed the passengers' concerns on Al Shabaab attacks as unfounded.

Kioi said that just like all Kenyans elsewhere, those travelling by road in Lamu must equally adhere to all the road safety regulations without excuses.

He said police will continue with the crackdown and arrest those flouting traffic rules including the passengers themselves.

“The security officers will continue to work around the clock to ensure security is guaranteed. No one should worry about security on the roads because that is our job. Traffic rules must be observed to the latter or else we arrest you,” Kioi said.

However, most residents live in fear of terrorist attacks in the area despite the police assurances on safety.

Isaac Gachukia, a Lamu trader in Lamu makes weekly trips between Lamu and Mombasa twice every week and claimed police were not in touch with the situation on the ground.

“The police don’t understand. If you don’t have a seat belt on, all you have to do is jump out of the window and flee, at least you will die trying to escape as opposed to dying because you have a seatbelt on. We understand traffic rules but they must know Lamu is different,” Gachukia said.