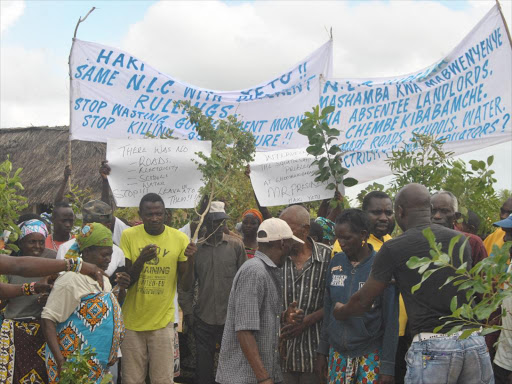 The area in Watamu, Kilifi, has 440 parcels. On Tuesday, National Land Commission boss Abigael Mbagaya said they are done with the scheme. She said 90 per cent of the land was cleared, a caveat removed and a Gazette notice issued on July 17.

The NLC chairperson said they would soon issue a notice of demolition to evict squatters who invaded private or public land.

“Invading private land without authority of the owner cannot make you the owner. Even if you build a flat it will be demolished,” he said.

The squatters have, however, maintained they will stay put.

Yesterday, they said they had been denied the right to own land. They marched in their numbers, young and old, carrying placards and twigs along the Jacaranda route. They said they had lived on the land for more than three decades and deserved to own parts of it.

The squatters said they were not satisfied with the NLC report, which allocated parcels to only those with titles. “We say no to madam NLC chair Abigael. Stop calling us squatters, Noooo!” one placard read.

They accused the commission of siding with absentee landowners and grabbers. Chembe Kibabamuche is one of the controversial government schemes. At some point, a caveat was placed over some parts. It was later lifted.

The squatters said their attempt to seek audience with the NLC over the land were unsuccessful. Tycoons benefitted from it irregularly, they said. Last year, however, the NLC verified ownership and conducted public hearings.

The residents want the issue revisited. Majengo Lughanje, 85, was evicted and his house demolished by a person who staked claim of the parcel. He said he was issued a notice to vacate the land after staying there for more than 35 years.

“I want my land and coconut trees. I planted trees and someone came recently to claim ownership. I was evicted and can’t even eat the fruits of my labour,” Lughanje said.

Hamisi Kombe said they are demeaned because of the squatter tag, while the rich are enjoying their “sweat after we developed roads”.

Benjamin Kimera said it was unfortunate that they are being told to leave after investing in the area. There are roads, electricity and water supply courtesy of the “so-called squatters”, he said.

Samuel Shariff said they live in fear as they could be evicted any time. He said their lives would be disrupted. Mama Ngangari urged President Uhuru Kenyatta and NASA chief Raila Odinga to intervene and stop their evictions.

Another Watamu land with controversies is Jimba Settlement Scheme. On Monday, the commission launched inquiry and investigations into its ownership.