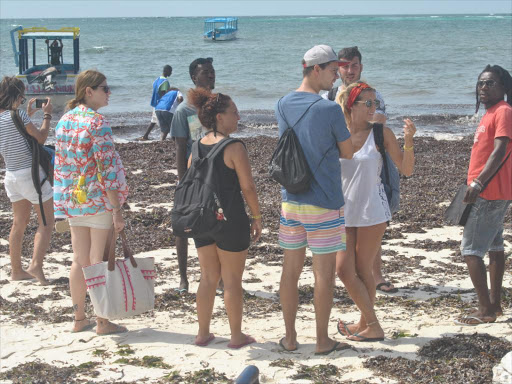 Tourists at the Watamu Marine Park on Thursday /ALPHONCE GARI

Tourism stakeholders in Watamu are promoting the Marine Big Five, which is becoming a major attraction.

Watamu has a new breed of the ocean big five, which is getting popular with holiday makers. The Watamu ocean big five include the billfish, dolphin, sea turtle, whale and the whale shark.

Travellers will get a chance to see the groups of marine animals in their natural environment.

Kenya Wildlife Service Watamu marine national park projects about 20,000 tourists. They will visit the park to watch the big five this season, up from last year’s 14,000.

Watamu marine park KWS warden Dadley Tsinganyiu on Thursday said the whale migration started 13 years ago with little publicity. Lately, there have been efforts to create awareness and attract tourists during their July-September migration.

“Marketing the marine big five will encourage tourists to visit Watamu and become aware of the need to protect the marine environment,” Tsinganyiu said.

He said Marine parks have not been exploited as much as terrestrial parks. “There is a need to market marine parks which have a natural ecosystem, ranging from the big five, coral gardens and marine reserves.”

He called on local and international tourists to visit marine parks. Most of those visiting the park are Kenyans, with a few others from Italy, Britain, Switzerland and Germany.

The marine park charges for a Kenyan adult is Sh130 and Sh125 for a child. Foreigners are charged Sh1,700.

In Watamu, there are readily available boats from hotels. The charges depend on the size of the boat.

Hoteliers have projected increased bookings, which will stabilise tourism. Resident manager Moses Migosi said there has been an increase in bookings this season.