Stateless people give up kids so they can get IDs, schooling 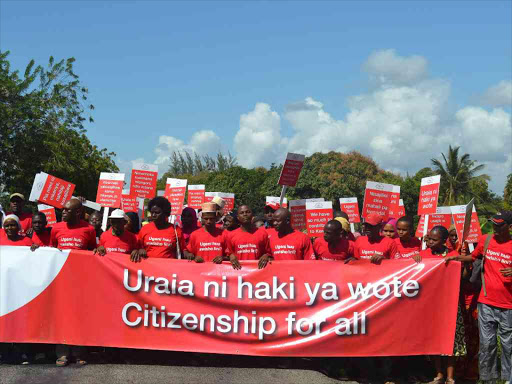 The 1,000 stateless people walk from Kwale to State House, Nairobi, on Monday. They want to meet President Uhuru Kenyatta to seek his help in getting Kenyan citizenship /ALLOYS MUSYOKA

Stateless people in Kwale have said they are forced to give away their children to local residents so they can acquire birth certificates and get an education.

The stateless people include the Makonde, who migrated from Mozambique before Independence, Wapemba from Tanzania, Rwandese and Burundians.

“We are forced to tell our neighbours to take our children and help them get birth certificates and IDs because they cannot get the documents through us,”Amina Kassim said on Monday.

She said this is one of the reasons they are walking to Nairobi. Some 1,000 representatives, including children and elders, left Kwale on Monday for State House, Nairobi, to seek audience with President Uhuru Kenyatta.

They are accompanied by Kenya Human Right Commission officials and civil society groups on the walk. Kassim said if the indigenous people with whom they have entrusted their children refuse to give them back, they cannot claim them, as they do not have citizenship. She is among those on their way to Nairobi.

Kassim said they are optimistic Uhuru will help them get citizenship. “We get jobs but we can’t go for them and instead give them to friends who have IDs,” she said.

Chairman Thomas Nguli said, “We have decided to see the President and tell him of our agony. If we cannot be given citizenship, then it is better for the government to get rid of us.”

But KHRC chief executive officer George Kegoro said the walk is the only way to ensure the people get government recognition.

Post a comment
WATCH: The latest videos from the Star
by By ALLOYS MUSYOKA @k2musyoka
Coast
12 October 2016 - 05:00
Read The E-Paper