High Court orders resort to let in Italian director, but workers still locked him out 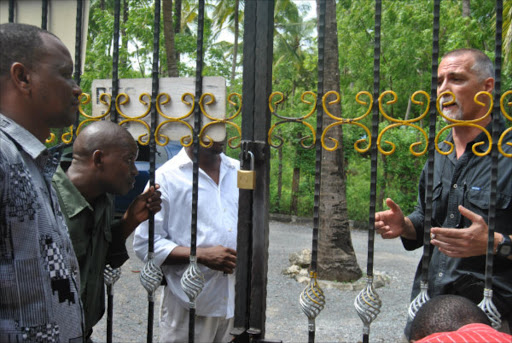 A Malindi court yesterday issued fresh orders for one of the directors of the controversial Sh1 billion Salama Beach Resort, now Temple Point Resort, to be allowed into the hotel after two attempts to get in failed.

Malindi judge Justice Chitembwe said the orders issued had to be executed before any appeal is lodged by German couple Hans Langer and his wife Zahra Langer, who were ordered out of the luxurious resort for allegedly acquiring it fraudulently.

Chitembwe ordered the couple to allow Uccelli into the hotel until Monday when the submissions for the appeal will be made at the High Court.

Lawyer Ahmednasir Abdulahi represented the couple in the case.

On April 29, Chitembwe ordered Isaac Rodrot, an agent of Viagi Ventaglio and Uccelli, to take over the ownership of Salama Resort from the Langer couple who have been running the hotel since 2009.

Uccelli the director of Salama beach was ordered to access the premises by the judge but he was unable to due to resistance from workers and locals.

had filed an application seeking to be allowed an extension of a 14-day stay order and also to prevent Uccelli from accessing the hotel until an appeal challenging the ruling was heard.

However, the judge said he will only issue orders for extension of the stay if the previous orders to allow Uccelli into the hotel until next Monday, when the matter was coming in court.

Chitembwe said, however, Uccelli should not take anything out of the resort.

Ahmednasir told journalists that justice will prevail when his client's appeal is heard.

Uccelli and his lawyer went to the resort but faced further resistance from the workers, who told him they "do not want him inside".

The workers said it would not be wise for him to be inside the hotel as there was tension over the hotel ownership wrangles.

to convince the workers to open the gates proved futile as they maintained he would not get inside.