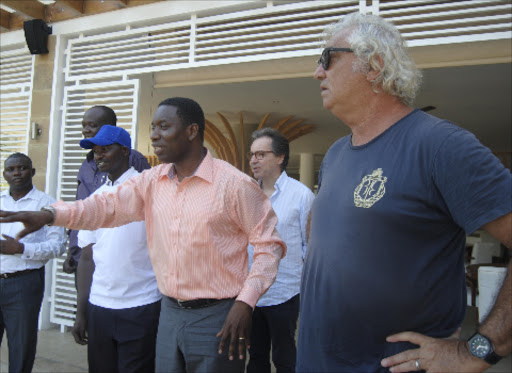 They formed Malindi beach association composed of tourism players in the region. The move was in response to increased cases of tourists harassment at the beaches claims.

The 16 men and four women were given T-shirts and shorts branded 'Malindi beach association' and ‘Malindi is safe'. The group will clean the town, which is a hub of tourists from all over the world.

Speaking during the launch of the association in Malindi town on Tuesday, Kazungu said the team shall be mandated to oversee operations at the beach and report any criminals to Kenya Wildlife Service rangers and police.

“This association is geared towards ensuring safety of tourists in the beaches and make it attractive for the world-class guests ,’’ he said. The legislator said malindi was a key area acting as te gateway of tourists in the country and which deserved to be maintained.

He said the beaches need to be protected as they were key component in the tourism industry which is heavily relied on. Mung’aro who is the immediate former Malindi legislator was also present at the launch and said public private partnership was the only way to help in improving the beach operations and bring sanity in the tourism sector.

Briatore said all hotels except one had united with one goal of ensuring tourists were safe and enjoyed their holiday without any form of disturbance in a clean environment.

He said the Malindi was paradise for tourists and deserved to be maintained up to the standards to attract many other investors.Mung’aro said public-private partnership will improve beach operations.

Post a comment
WATCH: The latest videos from the Star
by ALPHONCE GARI
Coast
30 December 2013 - 00:00
Read The E-Paper