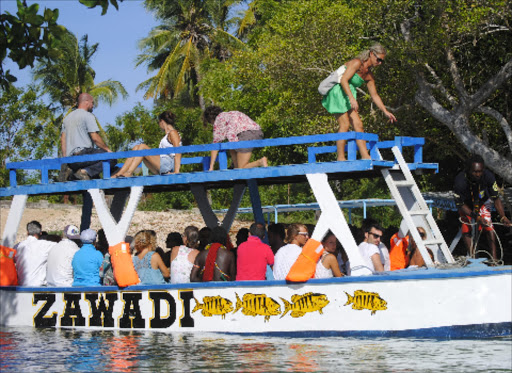 LOW TURNOUT: Tourists in a boat ride at the Mida Creek in Watamu last week.Photo/Alphonce Gari

About 16,000 hotel workers in Malindi and Watamu could soon be laid off following the effects of the grounded tourism industry. Hoteliers say hotel bookings have become too low to sustain the expenses and staff salaries.

Kenya Hotel Keepers and Caterers Association North Coast chairman Phillip Chai said Malindi and Watamu with a bed occupancy of more than 3300 have recorded less than 40 per cent occupancy this month.

Between November and April, hotels usually record more than 80 per cent bookings. Chai attribute the low turn out of tourists to the recent Westgate attack, Coast attacks and terror threats in the country.

Speaking to journalists in Malindi on Monday, he said the government did not take stiff measures to contain insecurity after the Westgate attack, Mombasa shootings and killing of preachers at the Coast.

"The government ought to have waived visa fees to attract more tourists and assure them of their safety," Chai said. He said hoteliers are considering laying off more than 16,000 workers due to the problem.

“The economy is completely down, tourism is dying and does not show any signs of change," Chai said. He said Kenyans will be cheated with a boom of domestic tourists during the festive season as hotels will be full but the foreign market will remain stagnant.

Chai said tourists currently prefer other destinations, which they consider safe. "The effects of the poor tourism will not only be felt by the resort hotel workers but also those who depend on the sector for survival," he said.

Malindi and Watamu are key tourism destinations that attract thousands of tourists each year.