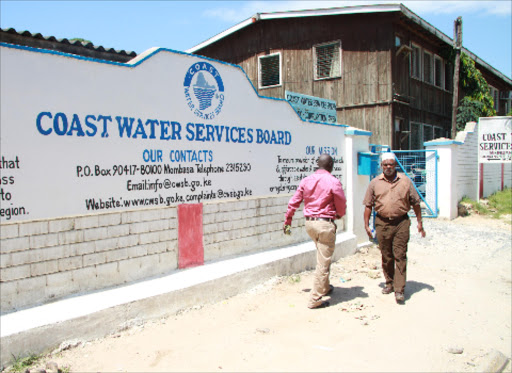 WATER IS LIFE: A man walks past Coast water Board offices at Mikindani street in Mombasa Photo/NORBERT ALLAN

The Coast Water Service Board (CWSB) has warned that supply in the region is threatened by unpaid bills of up to Sh300 million by water companies in the region. Chairman Anthony Mrima said they have given all the six water companies one week to pay the bills for be disconnected.

Speaking at Ocean beach resort in Malindi during the annual general meeting of Malindi Water and Sewerage Company, Mrima said the debts had greatly hampered operations.

Mawasco is among the leading water supply companies in the region and the AGM was told it is good financial state. “We supply water in bulk to these companies and they are supposed to pay us to enable us meet operation costs. This has not been done promptly by some of the companies,’’ Mrima said.

Mrima admitted that some companies were weak financially because of poor revenue collection and lack of subsidiaries from the national government.

He said Kwale, Tanariver and Lamu water companies are the most financially vulnerable and urged the county governments to consider funding them.

Mrima said government institution owe the Coat water millions of shillings in unpaid bills. He said departments such s District hospitals, prisons and Police among others had huge bills which had not been paid to water companies.

Post a comment
WATCH: The latest videos from the Star
by ALPHONCE GARI
Coast
16 October 2013 - 00:00
Read The E-Paper