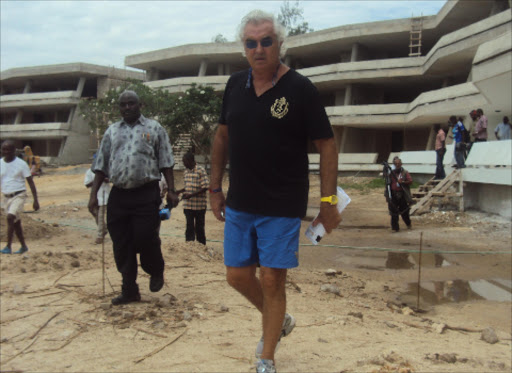 CONCERNS: Ex-Formula One boss Flavio Briatore at his resort in Malindi at the weekend. Photo/Alphonse Gari

An International investor has accused the Malindi Municipality of neglecting the town. Italian Billionaire and former Formula One boss Flavio Briatore said the resort town has deteriorated in the past four years. He called for action to bring back the good image of the town.

He was addressing a press conference together with Malindi MP Gideon Mung’aro at his Sh500 million billionaire’s resort at the weekend. Flavio said it is the responsibility of the authorities to build proper roads and clean the town to attract more tourists.

He said many high class tourist will flock to the resort town once the multimillion luxurious resort projects is complete. He however said the tourists will be unhappy in a smelly town.

“Malindi is very dirty. The authorities should not expect investors to clean it up for them because they have spent a lot of money in setting up big investments. The roads are also in pathetic condition," he said.

Briatore who is in the country with former Italian Prime Minister Silvio Berlusconi and family said Malindi deserved high class tourists because it was an amazing resort town with a cool weather.

“People have fallen in love with Malindi but services are very poor and competition is very high out there tourists can easily change and go to other destinations if the situation does not change’’ he said.

The luxurious project under construction he said composed of 24 apartments, lounge, restaurant and casino with 24 hour services for the clients. Briatore said once complete guests would have security, car with chauffer other high class services for them enjoy their wealth.

Currently he said 50 percent of the luxurious apartments had already been sold out to international celebrities and friends to the Billionaire and the remaining ones shall be full bought after seven or eight months.

“We have a lot of requests but we choose who we want to be inside the resort or not because Malindi deserves better tourists,’’ he said. The former Italian PM was not present at the press conference as he was said to be relaxing at the Lion in the sun hotel owned by Briatore.

Malindi MP said the problems faced by the authorities would be resolved soon after the new county government begins operations next year as funds would be allocated directly to the counties.

He said Briatore had a right to complain as an investor on any issues which were no going smoothly because the industry contributed alot in the revenue of the country. “I will talk to the Malindi mayor to ensure action is taken to bring back the town’s good image,’’ he said.

Malindi is a renowned tourist destination that attracts thousands of tourists each year; however it is currently faced with many challenges including maintenance of the town and lack of facilities including fire engines, sewerage system, among others.