Kikuyu elders have performed a ritual to allow a contractor to cut down a decades-old Mugumo tree, a strangler fig, in Riabai village Kiambu sub-county. 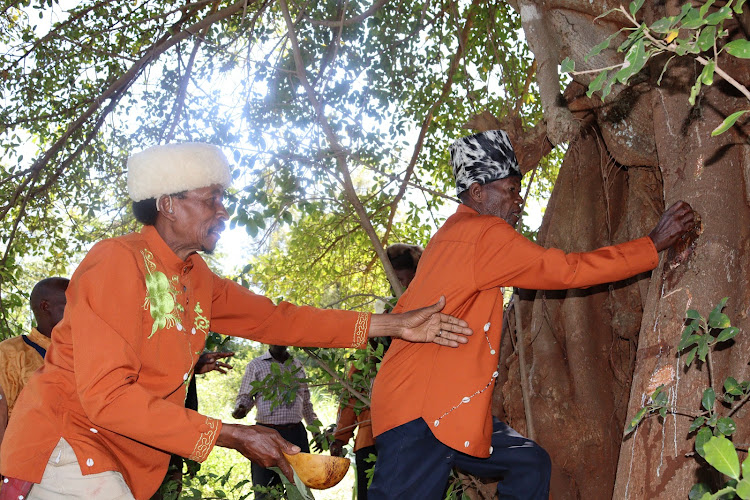 MUGUMO TREE: Muthamaki Mbugua wa Muthiora and other elders smear a concoction on a Mugumo tree in a ritual to allow it be cut down to make way for a water project, the Northern Water Collector Tunnel.
Image: STANLEY NJENGA

Kikuyu elders have performed a ritual to allow a contractor to cut down a decades-old Mugumo tree, a strangler fig, in Riabai village Kiambu subcounty.

The contractor is installing water pipes.

The Mugumo tree is regarded as a shrine and sacred place by the Kikuyu community. It cannot be cut down without a ceremony to appease God, or a catastrophe may befall the community or the persons cutting it.

The tree is in the way of the Northern Collector Tunnel water project being undertaken under the Nairobi water master plan for developing new sources of water for Raibai andand 13 satellite towns.

Muthamaki Mbugua wa Muthiora who is allowed to perform the rituals said that the ceremony is not done by any other person but community elders who are known as 'Athuri a Matura Nguru’, who are older than 80 years. 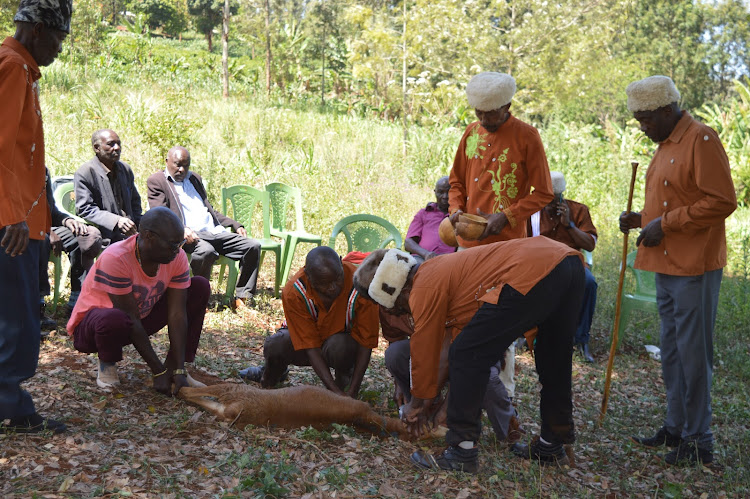 SLAUGHTER: Kikuyu elders slaughter a goat during the rituals performed to appease the gods to allow a Mugumo tree be cut down.
Image: STANLEY NJENGA

“It is not every Kikuyu elder Who is allowed to perform rituals of cutting down a Mugumo tree, as it is done by elders who are over 80 years and have been appointed by Kikuyu elders,” he said.

Mbugua said the trees are not planted by anyone and are rare and no one knows where the seeds of the tree came from. He added that the tree grows as a combination of many trees together.

“The Mugumo tree is composed of many trees intertwined together and where its seeds are said to have been brought by birds and it is rare. The Kikuyu community uses the tree for sacred ceremonies and no one dares to play around with it,” Mbugua said.

It is a taboo to cut down the tree without a cleansing ceremony.

“We slaughter a goat known as “Ngoima ya Mwiri Umwe’, which we offer to appease our god, before destroying any shrine. Thus it would have been a taboo if they cut this tree without this ceremony,” Mbugua said.

However not all Mugumo trees are regarded as sacred by the community.

During the ceremony, Muthamaki and other elders who are revered cut bits of the tree bark nine times around it where the tree sheds white sap.

It is sprinkled with a concoction that includes milk, goat blood, honey, salt mixed with traditional alcohol, muratina. 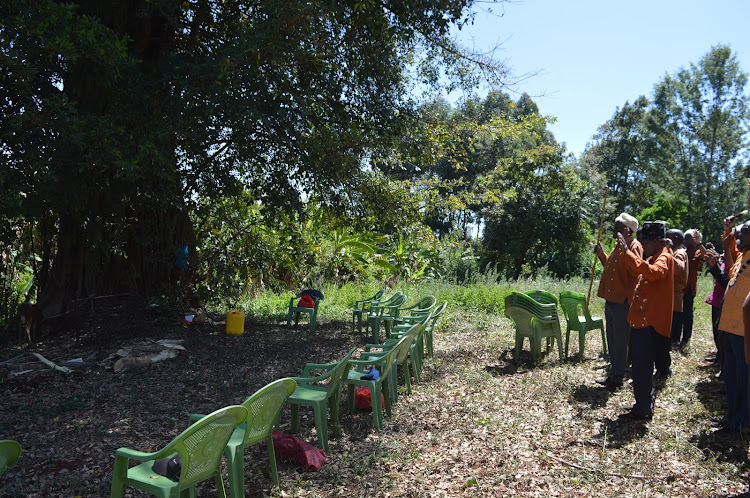 MUGUMO TREE: Kikuyu elders Pray before performing rituals to cut down a Mugumo tree in, front of them
Image: STANLEY NJENGA

Kiama Kia Ma chairman for Kiambu subcounty Mbiyu wa Kamau said that the cultural practice has been conducted for years whenever a Mugumo tree is being felled down to pave way for development.

“We thank the government for allowing the elders to fulfill cultural beliefs to pave way for development and to rid the community from bad omens that can befall them for cutting down a sacred tree,” Mbiyu said.

Mbiyu called on the government to map out the Mugumo trees within the country and protect them from being cut down unceremoniously.

He said that the elders should be allowed to conduct their cultural ceremonies without interference from the government as sometimes they are accused of holding illegal ceremonies.

“During our cultural ceremonies we usually conduct them using our traditional wine muratina, and we are accused of propagating illegal brews. Let us hold our ceremonies in peace as other communities do theirs as we are law abiding Kenyans,” Mbiyu said.

Signify failing Kalenjin leadership and a new crop of leaders?
News
2 years ago

600-year-old fig tree, home of spirits, stood in the way of a vital road.
Counties
1 year ago
Post a comment
WATCH: The latest videos from the Star
by STANLEY NJENGA Correspondent, Kiambu
Central
19 January 2023 - 22:00
Read The E-Paper