• Wanjiku, a community health volunteer in Molo, says the HIV self-testing kit has been a wonder kit in her bid to ensure people adopt it

• She says new infections among teenage girls from low-income households are triggered by economic hardship that came in the wake of  Covid-19. 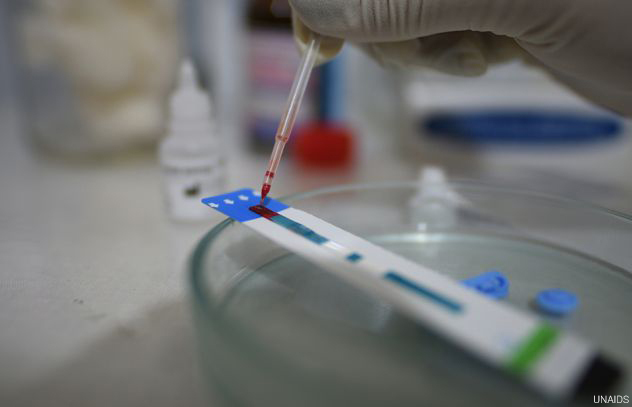 It is 10am and Jane Wanjiku rummages through her bag in search of something that is visibly vital in her line of work.

She pulls out a Bible, a bottle of mineral water and self-testing kits, which she opens with enthusiasm.

Excitement lights up her face. She notes something in her pocket diary.  Then she sighs and says she has been on demand lately.

She has 15 homes to visit by evening but only has 10 kits left. Five of her clients will have to wait until she gets more supplies. This could take time.

Wanjiku, a community health volunteer in a small and sleepy Tayari village of 57 homesteads in Molo, says the HIV self-testing kit has been a wonder kit in her bid to ensure people adopt it and constantly test themselves and are aware of their HIV status.

She says the uptake of the kits is encouraging, and attributes it to sustained awareness of the need for regular testing.

Community health volunteers such as Wanjiku are banking on self-driven initiatives in their campaign against HIV, awareness and prevention to improve campaign outcomes.

This is against an unsettling backdrop of a spike in new HIV infections among teenagers. Nakuru is among the counties the Ministry of Health has flagged as hotspots.

Adolescents are Wanjiku's target. She wants them to regularly use the kits and her free counselling services to ensure a drop in new infections among a population that is considered most at risk.

Wanjiku says new infections among teenage girls from low-income households are triggered by economic hardship that came in the wake of  Covid-19.

Having a considerable number of adolescent girls from low-income households where most are unable to afford sanitary pads, a majority of them resorted to indiscriminate sexual behaviour in exchange for money to buy pads and, in some instances, food.

Covid-19 containment measures such as lockdowns, closure of schools for a long period of time and curfews caused a diversion of health resources thus derailing their mission in down-scaling new infections.

The health worker says a considerable number of her clients privately request for the kit for fear of being stigmatised and discriminated against by those known to them.

“Most of them fear their parents might perceive them in a negative way. Some of them request for the kits and counselling after having unprotected sex and attending parties,” she says. “I assure them of their confidentiality.”

Wanjiku only delivers the kits on request and the requests are made during her regular rounds in the village. Before using the kit, the user, in the company of a parent or guardian, undergoes counselling.

Then at their own comfort, blood or oral sample fluid under the gum is collected, the HIV test is done and results interpreted in approximately 20 minutes. Once done, the kit is disposed of in a pit latrine.

Wanjiku, however, notes that during counselling, a CHV advises the user of the kit to visit a health facility thereafter just for the result to be confirmed by a healthcare provider. This is because the kit does not provide a definitive HIV-positive result.

Although self-test kits with an easy-to-read manual with diagrams are available in privately owned pharmacies, they retail at Sh500, which may prove prohibitive to underprivileged people living in the slums.

Users in informal settlements have called for free self-testing kits to expand access among the poor.

Wanjiku also attributes the increase in new HIV infections among the adolescents in her community to drug and substance abuse.

She regrets this has led to immorality and hampers their efforts in the fight against the HIV pandemic.

“Parents brewing illicit brews, for example, making their female children vulnerable to abuse. In these chang’aa dens, drunk customers prey on adolescent girls, impregnate them and most likely infect them with HIV,” she says.

“In some instances, the children are also tempted to consume the brew, and when they get intoxicated, they misbehave and indulge in unprotected sex. Similar scenarios are experienced in night parties where alcohol is always used.”

Wanjiku further discloses the parents are a hindrance to the bid. She says some parents not only refuse to accompany their children but also dissuade them from using these kits.

“Some end up discovering their status when it is too late,” she notes.

For children living with HIV and the orphans and vulnerable children, she says, are registered and have programmes that bring them together to share their experiences and follow up on taking their ARVs.

Parents find it difficult to disclose to their children their HIV status despite being well-informed of the stages of disclosure. They undergo a training process before their child reaches the stage of full disclosure.

This group of children is said to have been on drugs all their lives and when they reach the adolescent stage, many tend to resist taking their drugs, forcing the parents to devise means of informing them.

To those who remain mum, the child becomes a threat to others until the day he or she finds out about his or her HIV status.

She advised parents to adhere to the stages of disclosure and send their children to counsellors at the health facilities, who will gladly attend to them and walk the journey with them.

Keeping client information confidential, she says, has kept her going and she has earned the trust of many.

A clinician co-coordinating HIV and sexually transmitted infection in Molo subcounty, Nancy Keiyo, alludes to the fact that the kits have been fully integrated into the community through the help of the CHV.

Nakuru county has an estimated 65,860 people living with HIV as per the 2019 national HIV study. Of the number, 44,000 have been identified through testing and are on ARVs.

In the same period, there were 578 new HIV infections among the adolescents out of the 1,765 identified within the county. Health officials term this as highest compared to other key populations, including sex workers, gay men, and transgender among others.

Nakuru County Aids and STI coordinator Rachael Kyuna says they are committed to a scaled up health education within communities using CHVs as contact persons.

She says at the subcounty level, there are health promotion experts who normally package information on preventive measures and pass it through to various available media channels. They also make visits to learning institutions with intelligible messages about prevention and control of HIV.

Kyuna says once a person uses the self-test kit that is allowed for use by 15-year-olds and above and gets a positive result, the client is supposed to visit a health facility where the test will be conducted three times before confirmation by different trained personnel. This is all in a bid to give precise results.

In as much as there is health education promotion of the self-test kit, Kyuna insists people should visit the hospital to ascertain the results.

She advocates the use of the kits among adolescents who are sexually active, adding that there is a need to clearly follow instructions for use.

Recent data shows 98 per cent of new HIV infections occur every week among adolescents, 21 per cent of ante-natal clinic attendants of the similar age group and 53 per cent of sexual gender-based violence.

Additionally, the research findings show adolescents contribute up to 61 per cent of all new adult HIV infections nationally.

In Nakuru county, Kyuna points out, only 16 per cent of young mothers attend  antenatal clinic down from 18 per cent in 2018 yet this age group remains sexually active.

The couinty is reaching out to schools, talking to teachers to ensure students get the appropriate information focusing on abstinence, be aware of oneself and care for oneself and others (ABC) to empower them in the fight against HIV-Aids.

Kyuna appeals to parents, religious leaders and teachers to sustain the campaign at their various levels to help curb the scourge.

She urges members of the community not to take advantage of adolescents under their care but instead be role models to them.

Wanjiku hopes the stakeholder-driven campaign will continue and vowed to continue with her idea of testing and counselling for a healthy community.

Teen pregnancies in the county stand at 34 per cent while HIV prevalence is 19 per cent.
Counties
2 weeks ago

Sally, 23, is on a revenge mission. She resorted to sex work after high school and got infected.
News
3 weeks ago
Post a comment
WATCH: The latest videos from the Star
by KNA
Central
22 November 2022 - 21:00
Read The E-Paper