•  Wamatangi said he was puzzled on how cash, which could have been put into better use to benefit Kiambu residents was spent on luxurious issues by a few county officials.

•  “I however declined to pay it. This shows the magnitude of how public funds in Kiambu county were misused,” he said. 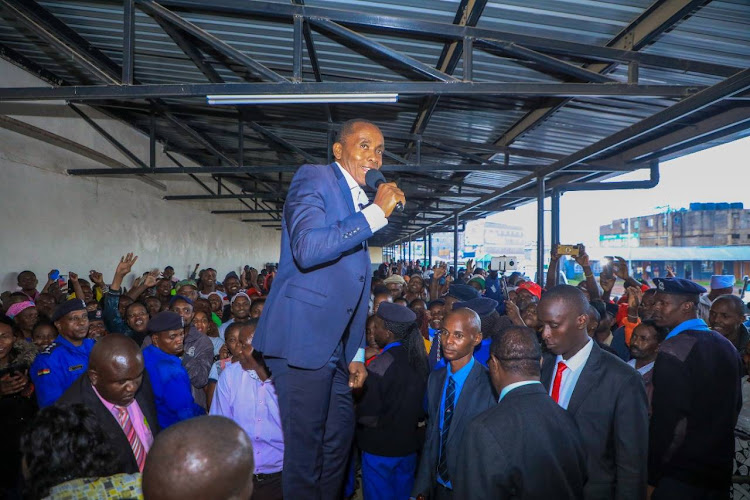 An unidentified hotelier has billed the Kiambu government Sh50 million for tea and snacks accrued by the previous administration.

Governor Kimani Wamatangi at a meeting with traders in Ruiru disclosed that a certain hotel owner [whose identity he didn’t disclose] approached him with the bill.

He said the hotelier claimed the bill was accrued by former governor James Nyoro’s administration during meetings.

Wamatangi said he was puzzled on how cash, which could have been put into better use to benefit Kiambu residents was spent on luxurious issues by a few county officials.

“I was shocked when the bill was tabled before me. I however declined to pay it because there’s no way we can give out such money that was just spent on tea and snacks. This shows the magnitude of how public funds in Kiambu county were misused,” he said.

The governor said this triggered him to conduct an overhaul of all departments within the county in a bid to weed out rogue county officials as well as seal all loopholes that were used to siphon public coffers.

“We have managed to identify and kick out ghost workers after I ordered for a head count for all employees. We have also managed to seal all loopholes that crooked county officials used to steal public funds. We want to ensure that every coin is put into its rightful use,” he said.

Wamatangi said his administration has adopted radical measures to cut county expenditure including pitching a tent at the county headquarters where all meetings are being held.

“We have put an end to the norm and tendency of county officials holding meetings in high-end hotels, which have been the reason for a bloated expenditure," he said.

"We want to ensure all public funds are put into proper use for the sake of developing our region and serving Kiambu people optimally.”

The county chief however said that the radical changes he has initiated have not gone down well with a section of individuals who have been enriching themselves with public money.

He said the individuals have launched a campaign to discredit and soil his name on social media platforms.

“They have baptised me all manner of names including ‘Mkono ngamu’ (stingy man) just because I blocked them from dipping their hands into public coffers," the governor said.

"I’ll however remain unmoved by their attacks so long as whatever we are doing is for the betterment of Kiambu electorates livelihoods.”

He said his administration is also in talks with the national government to put up the Githurai Two Market that will cost Sh850 million.

“My administration will also put up two more markets at Githurai Post Office and Muiganania at a cost of Sh50 million each," Wamatangi said.

The governor further said the leadership of the markets will be conducted in a transparent and fair process that shall involve traders.

"The traders will spearhead listing of beneficiaries of the new market, which is one of the 20 modern markets my administration has earmarked for construction across the county,” he said.

The traders have complained about the allocation of stalls to friends and proxies.
News
3 weeks ago

They said 10 motions should be tabled to discuss the nominees' suitability as some aren’t known to them.
News
4 weeks ago
Post a comment
WATCH: The latest videos from the Star
by JOHN KAMAU Correspondent
Central
15 November 2022 - 15:01
Read The E-Paper