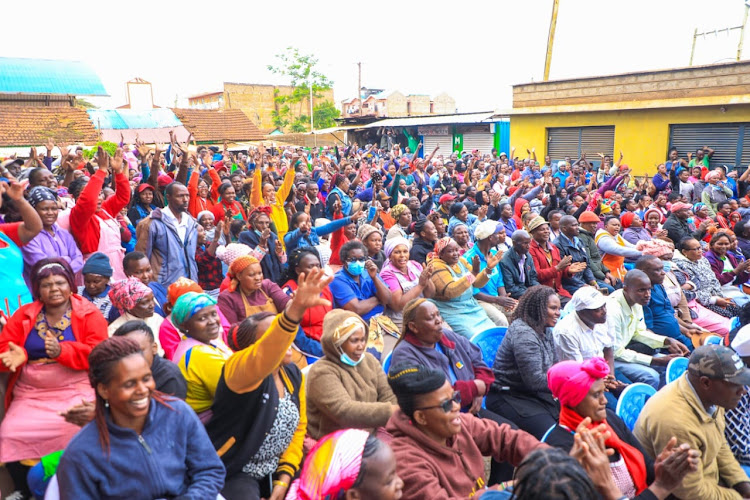 Ruiru traders during the meeting on Saturday.
Image: JOHN KAMAU 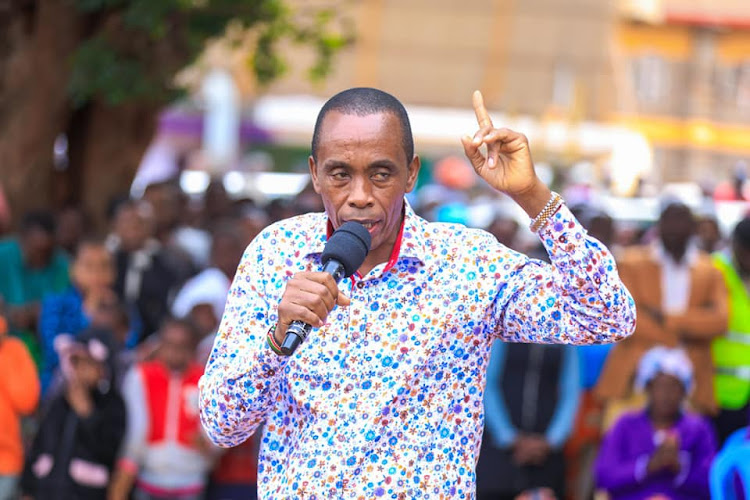 Plans are in the offing to rebuild Madaraka market in Makongeni Thika that was torched by arsonists in November 2015.

Kiambu Governor Kimani Wamatangi said  the arson attack that left over 5,000 traders at the market counting huge losses was the reason why World Bank reneged putting up a Sh400 million modern market.

The governor noted that Madaraka market was among the markets in Kiambu county that were to be funded by the World Bank Nairobi Metropolitan Services Improvement Projects (NAMSIP), but was left out after the attack.

Wamatangi spoke at Ruiru modern market on Saturday during a meeting with traders to quell a duel between three factions of the traders who have been tussling over market spaces.

“We are currently sourcing funds from our financial partners including World Bank so that we can construct a modern market at Madaraka. We want to give our traders a conducive environment to operate because they have suffered for long while operating under pitiable conditions and harsh climatic periods including rains and scorching sun,” Wamatangi said.

The governor noted that county architects are embarking on coming up with proper architectural designs for the market noting that other markets built by previous regimes like the Ruiru market do not conform to the standards of a market.

“This market (Ruiru market) is built like an offices building, it’s not a market. I faulted the designs when I was the county Senator and told them to relook into them again but they went ahead and constructed a structure that is only good at hosting offices. The market that will be built at Madaraka will be done by our officers and it will be built to quality standards,” he said.

The county chief quipped that the market will be fitted with requisite amenities that will give traders and their customers ease of access.

“Before we secure the funds, the county government will facilitate rehabilitation of the market which will include fencing, lighting, construction of pavements, drainage and construction of lavatories,” he said.

“The market serves a large population including parts of the Ukambani region, Garissa residents and Kiambu county with traders from as far as Murang’a and Kirinyaga trading in the market,” he said.

Meanwhile, Wamatangi said his administration will find a solution to the quarrelling traders at the Ruiru market.

Traders at the market have been fighting over selling spaces with the new market harbouring 695 traders while 1,100 traders operate in the open air market.

However those operating within the markets have been fighting with traders operating outside the market claiming they have been ‘stealing’ their customers.

“Those operating within the markets have been making less or no sales because there are other traders selling similar wares and products right outside the market,” said the market chairman George Kamau.

Kamau noted that the traders are slowly deserting new market and branding it ‘a mortuary’ due to dump environment and lack of clients.

“We want all traders squeezed inside the markets so that we can all have the same opportunity to sell our products,” he said.

The governor picked 10 members of each faction and promised to work on a lasting solution.

Governor Natembeya presides over the ground-breaking of new market

Natembeya asked the contractor to complete the project in two and half month.
Counties
4 weeks ago

Ministry of Industrialization, Trade and Enterprise Development wants to put up one-storey building.
Counties
1 month ago
Post a comment
WATCH: The latest videos from the Star
by JOHN KAMAU Correspondent
Central
14 November 2022 - 22:00
Read The E-Paper