Are carbon credits next frontier for marginalised North?

Project involves 14 conservancies in the counties of Marsabit, Isiolo, Samburu and Laikipia 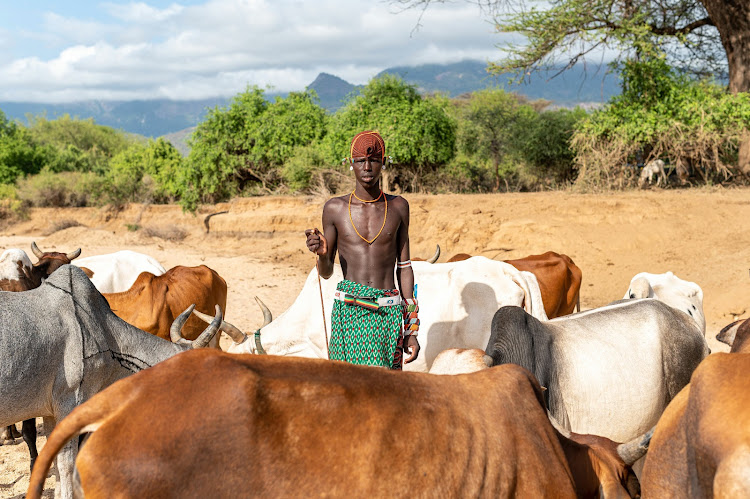 A Moran poses with a herd of livestock. Image:Courtesy.

Caught between insecurity and constant hunger due to the raging drought, residents of Northern Kenya have forgotten what hope feels or looks like.

In fact, as one drives along deserted and dusty roads, encounters with malnourished children with bloated stomachs are common.

To them, survival of the fittest is critical in this part of the world following several years of marginalisation.

In some areas, communicating with them remains a challenge as most have never set foot in school.

The community has nonetheless always longed to be food secure, nutrition secure, have a decent life, and have sustainable peace.

A new project is however proving to offer a glimmer of hope.

The Northern Kenya Rangelands Carbon Project is one of the world’s largest soil carbon removal projects and proof concepts for rangelands restoration and community-run development through the carbon market.

The project areas are in the counties of Marsabit, Isiolo, Samburu and Laikipia.

Each of the conservancies got Sh20.7 million from the sale of carbon credits.

In all the conservancies, locals refer to the cash as “pesa ya hewa.”

All the conservancies are members of the umbrella organisation Northern Rangelands Trust, which was set up as a shared resource to support conservancies in northern and coastal Kenya.

The initiative works with cattle herders to combine traditional and modern ways of grazing livestock, to restore savannah grasslands so they capture more atmospheric carbon.

That carbon is sold as offsets on the global carbon market to earn local communities’ sustainable income, support the conservation of vulnerable landscapes, protect endangered wildlife, and address climate change.

It is anticipated that the project will remove 50 million tonnes of carbon dioxide from the atmosphere for over 30 years, an equivalent of the annual emissions from over 10 million cars, generating millions of dollars for the local community.

Priscilla Kushi, a local community member and Carbon Project officer with Northern Rangelands Trust says improved grazing management through rotational grazing across the conservancies has led to improved pasture for livestock and wildlife.

“That means more grass, more pasture, more jobs and healthier livestock and wildlife. This in turn improves soil conditions and when soil conditions are improved, there is more water storage and water retention,” she says.

Kushi says the move will in turn store more carbon in the soil.

“We also get healthy animals which will put better prices in the market and this improves the income for the pastoralists,” she adds.

The project benefits the local communities, conserves nature, improves the environment, and directly addresses the impacts of global climate change.

In fact, Kushi says, the project which started in 2012, links rangelands restoration and livestock grazing planning to direct financial benefits for herders and local communities by generating long-term sustainable revenue.

Kushi says the first carbon credits were generated in 2013 and these credits along with subsequent years of verified credits were offered to the international voluntary markets.

“It has generated $14.6 million for local conservancies to date,” she says.

Through the project, some 3.2 million tonnes of carbon were verified and sold through voluntary markets as historical carbon.

Kushi says in February 2022, each of the 14 participating conservancies received $324,000 as their first three payments from the sale.

She says the project in which NRT does not receive any profits helps to improve rangelands across 1.9 million hectares (4.7 million acres).

It is expected that the sales from the remaining 27 years of the project will generate an even higher amount.

Kushi says the funds are split between conservancy operations and the needs that the community identifies.

“The funds are channelled directly to communities who hold sole financial control and spend it on community-identified and endorsed projects,” she says.

Kushi says due to conservation initiatives, wildlife numbers across the project area are increasing.

For instance, the four endangered species being protected in the project area include the Eastern black rhino, Grevy’s Zebra, Reticulated Giraffe, and Beisa Oryx, all of which benefit from the increased funding towards the conservation and restoration of rangelands.

Kushi says the project is improving the livelihoods of more than 205,000 people while improving pasture for livestock and wildlife.

In Lekurruki, the money from the project has been used to service roads and airstrip bringing guests into Tassia lodge which has the capacity to host 16 visitors.

“We used Sh5.5 million to renovate the lodge,” Lenantiri says.

An additional two rooms have also been done and bed sheets, pillows among other work in the lodge with a view of giving guests the best experience.

The rooms have also been fitted with water heating systems, in a deliberate move aimed at cutting off the use of firewood.

A borehole has also been done in addition to the piping of water to the lodge.

The nearby communities can also access water, courtesy of carbon cash.

In Leparua Community Conservancy, locals have been introduced to rotational grazing, a move that has enhanced sustainable grazing.

So strict are the grazing rules given by the committee that the offenders are heavily fined.

Elders and the grazing committee once fined Samson Kodei a sheep.

“I had slept in the shade when some of my sheep went beyond the allowed area. I was fined a sheep by elders,” he says.

At the Samburu Community School, the funds from the carbon credits have been used to buy beds and bursaries for needy children for nomadic kids.

“When we get more money, we will increase the number of beds,” Mohamed says.

She said the funds have helped to boost the education of the children who would have otherwise followed their nomadic parents in search of water and pasture for their livestock.

The funds have also helped ease tension between the warring communities as they have to deliberate on how to share the available resources.

“We have funds for peace building, rangeland management, water structures, a move that will create stability and reduce conflicts over water and pasture,” Lalampaa says.

He says the government should have supportive legislation.

“We also need fair tax, if carbon credits are heavily taxed, it will hurt the local communities and disincentives. Fair tax will incentivise as the project is on community land rather than private and public land,” Lalampaa says.

The project has since been recognised globally.

During the ongoing climate talks in Egypt, the project is set to be recognised as Lighthouse from the Natural Climate Solutions Alliance at the Conference of Parties talks in Sharm el-Sheik.

The Natural Climate Solutions Alliance is a multi-stakeholder group of businesses, solution providers, and NGOs that are working to scale natural climate solutions in the voluntary carbon market.

Programme has been rolled out in over 40 schools within mining-affected areas.
News
4 weeks ago
Post a comment
WATCH: The latest videos from the Star
by GILBERT KOECH News Reporter
Central
14 November 2022 - 22:00
Read The E-Paper