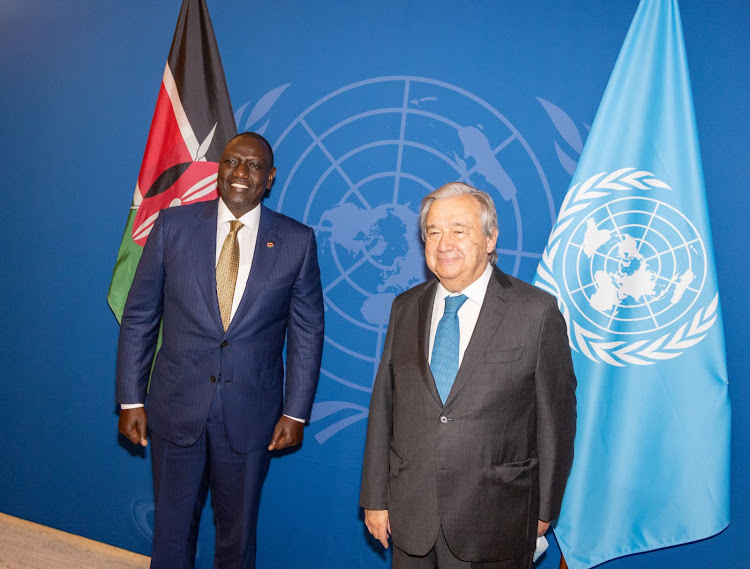 The United Nations is pushing to have universal early warning systems within five years to cushion vulnerable communities against the vagaries of climate change.

UN secretary general Antonio Guterres said people and communities everywhere must be protected from the immediate and the very growing risks of climate emergency.

He spoke during the launch of the Global Climate Report 2022 at the just started 27th Conference of the Parties (COP27) climate change meeting in the city of Sharm el-Sheikh, Egypt.

“We must answer the planets distressed signal with ambitious and credible climate action. COP 27 must be the place, and now must be the time,” he said.

He said as COP27 gets in the way, the planet is sending a distressed signal. The latest state of the global climate report shows a chronical of climate chaos.

According to the World Meteorological Organisation, climate change is happening with a catastrophic speed and it is devastating livelihoods on every continent.

“The last eight years have been the warmest on record, making every heat wave more intense and life threatening especially for vulnerable population. Sea levels are rising at twice the speed of the 90s. This is posing a threat for low lying island states and threatening billions of people in the coastal regions. Glaciers are melting away and jeopardising water security,” the UN boss said.

More than 50,000 attendees are registered and expected to participate in the United Nations Framework Convention on Climate Change (UNFCCC), COP 27 which started on November 6 and will end on November 18.

President William Ruto is expected to address the convention as the chairperson of the Committee of African Heads of State and Government on Climate Change on behalf of African states.

According to a statement issued by State House spokesperson Hussein Mohamed, the President who will be leading the Kenyan delegation, will be keen in addressing the effects of climate change in Africa amid the current drought facing parts of Kenya and the continent.

“The President is expected to rally the globe towards a more ambitious climate action, seeking implementation and honouring of commitments made over the past 30 years by countries with the greatest responsibilities for accumulating greenhouse gases causing global warming. He will also be outlining Kenya’s policies and strategies to tap into the global carbon market,” the statement read.

Pan African Climate Justice Alliance executive director  Mithika Mwenda said loss and damage is a hotly contested issue depending on where one comes from.

He said the current devastating drought has left untold damage and led to the death of over two million cattle, Kenya will be seeking compensation for such losses.

“For Africa, this is the priority as climate change is no longer an issue of tomorrow, and that the issue of loss and damage as a result of climate change is going to inform the African demand. We are with it and feeling it,” Mwenda said.

He said civil society groups will be demanding for urgent intervention and frank negotiations on loss and damage, given the evidence already provided by the Intergovernmental Panel on Climate Change (IPCC) report.

According to the  report, “residual risks” will rise as temperatures increase. The report ranked Africa as the most vulnerable continent, with foreseeable catastrophes like those seen in Malawi, South Africa, Mozambique, and Chad, among other African nations.

“We demand that parties put a clear distinction between loss and damage and disaster risk reduction as provided in the report. We demand the establishment of a special finance facility for loss and damage response in line with article 8 of the Paris Agreement,” Mwenda said.

Kenya Climate Change Working Group chairman John Kioli said somebody should be held responsible for the repairs caused by the loss and damages.

“We do not have insurance to compensate people who have been displaced by the flooding in Lake Baringo. Hotels near Lake Naivasha that were once a source of livelihood for many Kenyans have been submerged. Who is going to pay these people? This is where developed countries should come in and take responsibility. The current severe drought has led to the death of over two million livestock in 23 counties in the Arid and Semi-Arid Land areas,” he said.

Ruto to lead Kenyan delegation to COP27 in Egypt

He will also be outlining Kenya’s policies, strategies to tap into the global carbon market.
News
3 months ago

More than 120 world leaders will be to the Red Sea resort, Egypt
News
3 months ago

What you need to know about COP27

Dubai is set to host COP28.
News
2 months ago
Post a comment
WATCH: The latest videos from the Star
by AGATHA NGOTHO Science Writer
Central
08 November 2022 - 05:00
Read The E-Paper