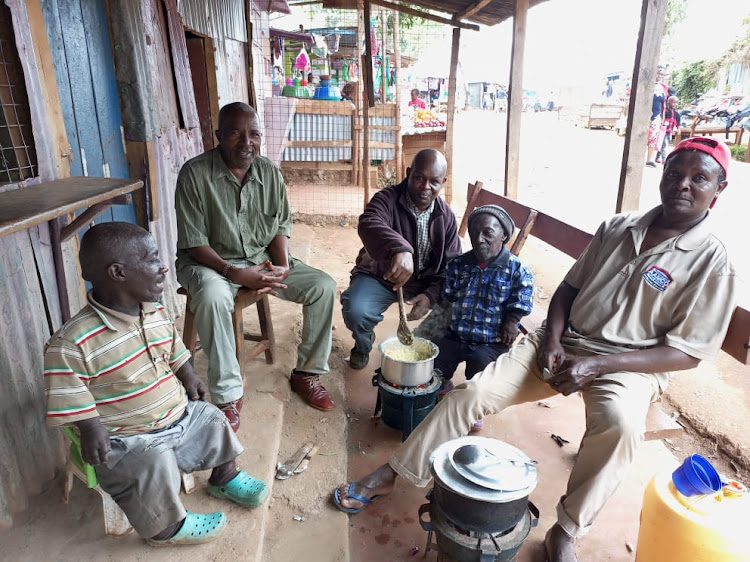 Some Murang'a town traders prepare a meal outside their business premises to celebrate Ruto's swearing-in on September 13, 2022.
Image: Alice Waithera

Murang’a town residents have asked President William Ruto to get down to business and implement his manifesto as soon as possible.

The residents said the overwhelming support they accorded him was due to his manifesto since he had promised to improve the livelihoods of all Kenyans.

They singled out the bottom-up economic model that was central to Ruto’s campaigns in which he pledged to prioritise the poor in his administration.

Now that he has been sworn in, they want him to keep his word and put in place measures to cushion Kenyans from harsh economic times.

The traders who were preparing a meal to celebrate the win outside their business premises said they prayed for a long time for Ruto’s victory.

Stephen Kinyungu,  one of the traders said they held their celebrations until Ruto was sworn in as they waited for all the grievances registered by the Azimio to be resolved.

“Now we decided to prepare a meal to share amongst ourselves and passersby to show our joy,” he said.

Kinyungu said despite having one of the best manifestos, Ruto faced a myriad of challenges in his campaigns and that his victory was worth celebrating.

But now that he is firmly in control of the government, Kinyungu said he should remember that Kenyans are still struggling to feed themselves.

Kinyungu, a 60-year-old man with  dwarfism also challenged Ruto to incorporate people living with disabilities into his government.

“Persons living with disabilities have been sidelined for long despite the law requiring that they be included in government,” he said.

As a trader, Kinyungu desires a thriving economy to improve the livelihoods of Kenyans.

He, however, cautioned media houses to remain impartial saying some clearly displayed preference for some candidates during the campaigns.

Gaitho Muturi, another trader said he was elated that Kenyans maintained peace during and after the general election.

“I am celebrating the peace we have had and I hope it will continue for the next five years,” he said.

He urged Ruto’s administration to create a conducive environment for business and lower the cost of living.

Muturi said he can't  wait for the President to implement the bottom-up economic model saying it will put money in people’s pockets.

On Monday, the governor flagged off drugs worth Sh29 million for distribution to all 115 health facilities in the county.

Francis Karanja urged both national and county governments to work in harmony to improve the lives of Kenyans.

“We hope Kang’ata will learn from the challenges that faced his predecessor Mwangi Wa Iria to work better,” Karanja said.

Nduati has served in the position for two terms and, if elected, will be speaker for the third time.
Counties
3 weeks ago

Nairobi county has 142 schools followed by Kiambu with 114.
News
1 month ago
Post a comment
WATCH: The latest videos from the Star
by ALICE WAITHERA Correspondent, Murang'a
Central
14 September 2022 - 22:00
Read The E-Paper