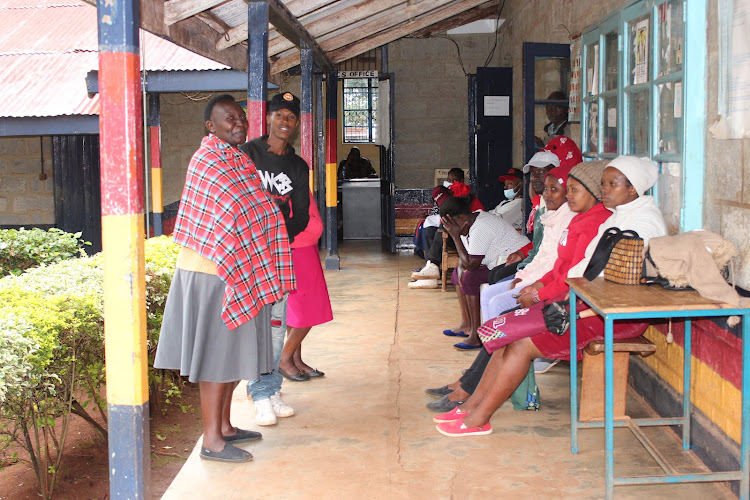 CONNED: Some of the victims who were conned under the pretence that they would be employed by Murang'a county at the Murang'a police station on September 6, 2022.
Image: ALICE WAITHERA

Referring to a report made by members of the public on Tuesday about a woman who had obtained money from a group of youth promising to give them jobs, Wakuu said that the victims needed to be more vigilant.

“Twenty two people came to the station this morning claiming that during the months of June and July 2022, they were approached by a woman who works with Murang’a county government who claimed that the county was employing casual workers,”she said.

“The suspect who is now in custody here at Murang’a police station told them that each was to pay Sh10,000 which was to cater for aprons, boots, gloves and NHIF as well as NSSF cards.”

According to the commander, the woman then went ahead to allocate each of the youths jobs such as sweeping and attending to parking lots in various parts of the town. One of them was assigned the role of supervisor.

The youths started being suspicious when they found out that all other county employees had been paid their August salaries except them and that is when they decided to confront the suspect.

Wakuu urged all youth seeking employment to be vigilant so as not to fall prey to anyone who asks for money with promises of getting them jobs.

“Members of the public should be cautious against any job that asks for money before someone is employed because it probably won’t be genuine,” she said.

Some of the victims of the suspect, identified only as Mercy, narrated how they thought they had secured jobs with the county.

Edwin Marathi from Thuita, who said he was introduced to the suspect by one of the other youth who had also been defrauded, said he had parted with Sh10,000 in the hope of securing a job.

“I had come to Murang’a for a job. I was asked for Sh10,000 and assigned a job as a supervisor,” Marathi said.

Another victim, Nancy Nyambura, said she had worked for a month before she discovered she had been conned.

“It was Mercy who showed me where I would be sweeping in the outskirts of town,” the victim said, adding that they were even required to sign attendance forms every day.

James Maina, who used to work as a boda boda operator in town, recounts how he heard about the county jobs in June and filled the forms he was given after parting with Sh20,000.

“When we reported to work she asked for an additional Sh345,” he said, adding he has been working for three months.

The youths who have been doing casual jobs in various stations in Murang’a town had been promised a monthly salary of between Sh15,000 and 20,000.

The suspect was on Wednesday morning arraigned in a Murang’a court, where she denied charges of with obtaining money by false pretences.

To be recruited,  victims were told that they needed to part with at least Sh10,000 each
News
2 months ago

He lured a Dutch national to Nairobi and defrauded him in pretext he will send him 50kg of gold.
Counties
4 months ago