•He said Kenyans are eagerly waiting for Uhuru's message a move that would help the country move forward.

•He urged Uhuru not to embarrass himself and the people of Mt Kenya in general saying Kenya deserves respect even from the international community. 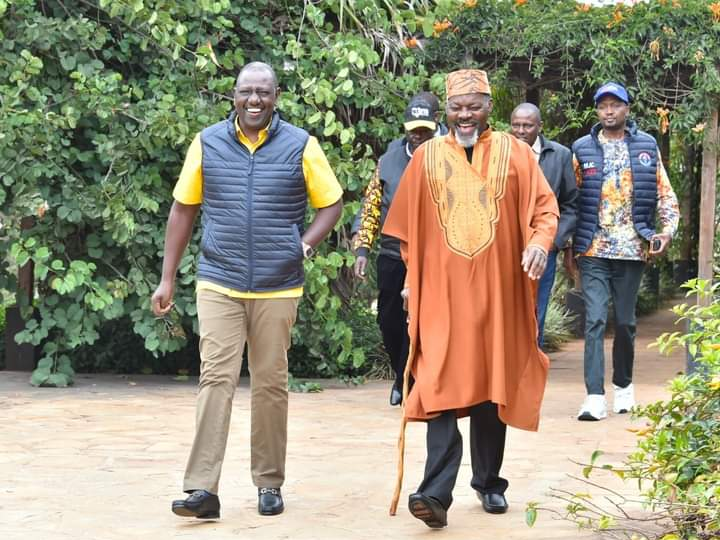 Kung’u said Uhuru is doing himself more harm by failing to congratulate Ruto.

Muigai, who is the Kikuyu Council of Elders patron, said both politicians ought to set a great example to the future generation who look up to them as the leaders of the current regime.

He said Kenyans are eagerly waiting for Uhuru's message a move that would help the country move forward.

“I’m requesting Uhuru Kenyatta to do the honourable thing and send a congratulatory message. This will help ease the tension that is currently building,” Kung'u said.

He urged Uhuru not to embarrass himself and the people of Mt Kenya in general saying Kenya deserves respect even from the international community.

Kung'u spoke to the Star on Wednesday.

Raila held a meeting with all the leaders elected on the Azimio ticket at Kenyatta International Conference Centre on Wednesday.

Kung'u said Uhuru and Ruto should find a silver lining in the situation and come to terms, saying he had tried to mediate between the two leaders to no avail.

“The Kikuyu community is fully behind Ruto and this has been demonstrated by the just concluded election and we will be part of his government,” he said.

About two months ago, Kung’u, who is the younger brother of Senator Beth Mugo, publicly endorsed Ruto.

Kung'u said he couldn’t deny that Uhuru promised to support Ruto’s presidential bid citing the famous promise of yangu kumi ya Ruto kumi which was made by Uhuru in 2015.

The Akamba Governing Council of Elders national chairman Boniface Kilonzo has also said they will work with Ruto unless the court rules otherwise.

He said the Akamba council constitution dictates that the community will work with the president of the day who has been declared legitimate.

“Currently, we recognise William Ruto as the president-elect, we respect constitutional bodies as IEBC and we can only change mind if the court gives a directive order contrary to what was announced by IEBC,” Kilonzo said.

They also congratulated former Prime Minister Raila for promoting peace despite the issues that he raised during a press briefing on Tuesday.

He urged Raila to either concede defeat or seek legal redress.

He urged Kenyans to maintain peace and order and ensure the unity of the country is respected.

“We will work with Ruto and his deputy Rigathi Gachagua by according them the support they need,” Wachira said.

I will challenge Wamatangi win in court - Wainaina Jungle

He cited that some of his agents were thrown out of the tallying centres.
News
5 months ago

He said that the process has been very shoddy and the process was marred by irregularities.
Counties
5 months ago

Muriu pledges to serve even those who did not vote for him.
News
5 months ago