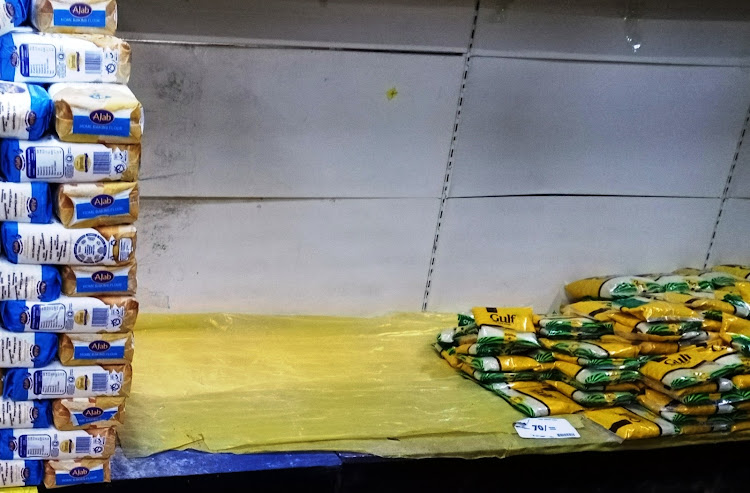 UNGA SHORTAGE: An empty flour meal slot in one of the shelves in a supermarket based in Kirinyaga county.
Image: WANGECHI WANG'ONDU

Shelves are empty of unga in most supermarkets and retail shops in Kirinyaga after the government announced a subsidy.

A spot check  by the Star revealed that most shops are strictly allowing shoppers to buy a maximum of two packets should the commodity be available.

Those interviewed said they have been forced to shop for unga outside the county, while others have settled  for alternative food as many of the shops are not meeting their need.

Mercy Wangui,a resident, said she was Thursday forced to purchase the commodity in bulk while in Thika when she had gone to attend to some personal matters.

"I knew Kirinyaga is suffering from an unga shortage and so I took advantage of my presence in Thika to purchase as much flour as possible, which I know will push my family for some weeks,"she said.

Teresiah Wawira, another resident, expressed her disappointment after having travelled from Mwea to Kerugoya in search of flour only for her to suffer a setback.

She said her family has now been left with no choice but to bear the shortage until a time when the government will fully intervene.

"This biting cold has pushed us to the end because all we can afford to feed on is rice, which to us is a light meal. Our prayer is for the government to intervene and ensure that we get the discounted Unga," Wawira said.

His sentiments were echoed by Samuel Muchira who urged the government to do everything possible to ensure that it compels millers to release the unga in bulk.

"I have been visiting the supermarkets everyday with the hope that I will find the subsidised one. Unfortunately I am always disappointed as it is never available," Michira said.

One of Kerugoya supermarket managers who sought anonymity equally expressed his disappointment over the crisis, saying they are suffering the biting loss.

He said that, despite placing orders to different millers, their requests have been met by empty promises.

"We have been persistent in following up on our request to have our orders delivered but all they reply is that they have taken note of it," the manager said.

The manager said in the course of last week they received 60 bales, which the customers scrambled for and the essential commodity was cleared in less than half an hour.

"We were shocked by the rate at which shoppers are scrambling for maize flour. This a crisis that needs urgent intervention because everyone is suffering. On our end we are hardly making any profit with this discounted Unga,” he said.

The manager added that, despite customers being ordered to shop for a maximum of two pieces, some shoppers are devising tricks and picking more than the ordered packets.

He said the government had since given an executive directive ordering for the downward revision of the commodity prices and, as such, no one had the  right to hoard.

The nation has two days to reflect, set aside the mudslinging and slurs and vote wisely on Tuesday.
News
1 month ago

On July 20, Uhuru announced that unga was going to retail at Sh100.
News
1 month ago

Uhuru has ordered maize flour to retail at Sh100 for a 2kg packet.
News
2 months ago
Post a comment
WATCH: The latest videos from the Star
Central
08 August 2022 - 22:00
Read The E-Paper