Forgive me if I wronged you, Uhuru tells Mt Kenya

• He said that Kikuyu and Kalenjin communities became friends in 2013 despite their fighting in post-election violence in 2007, 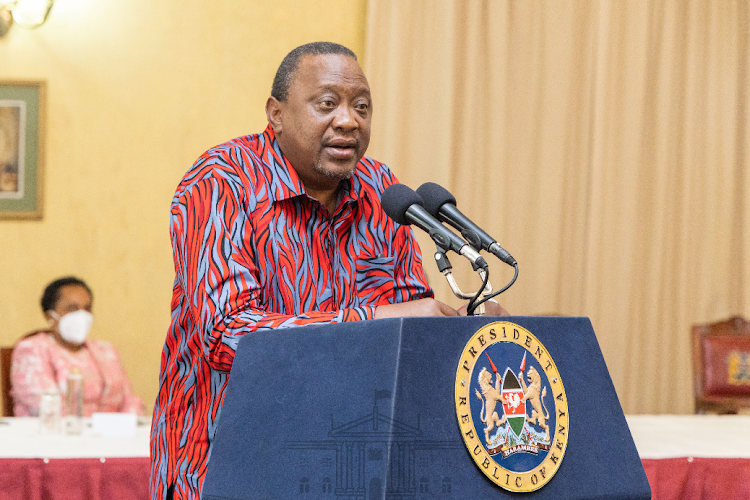 The campaign period on Saturday ended for candidates, but not for President Uhuru Kenyatta.

The campaign law doesn't cover him and the head of state can address anyone he likes at any time.

And that's just what President Kenyatta, an ardent campaigner for Azimio presidential candidate Raila Odinga, did on Sunday. He urged a vote for Azimio's Raila and running mate Martha Karua.

Speaking at State House on Sunday during an interview with all Kikuyu vernacular stations, Uhuru asked Kenyans for forgiveness if he wronged them while in office.

President Kenyatta said it has not been easy governing Kenya as it has faced numerous challenges.

He cited corruption, al Shabaab attacks, the Covid-19 pandemic and the politics of hatred.

The President said the fight against corruption has made him many enemies countrywide, especially from leaders who are seeking election.

He further said the Kikuyu and Kalenjin communities became friends in 2013, despite their fighting in post-election violence in 2007.

The 'handshake', the President said, signalled peace between the Kikuyu and the Luo communities.

Uhuru said he holds no ill will against anyone, and urged Kenyans to vote for leaders who mean well for the community, adding that anyone who incites violence during the election period will be prosecuted according to the law.

The President said Kenyans have a right to vote peacefully and let the IEBC to carry out its roles without interference, including the announcement of the next president.

“Do not be lured by sweet-talking politicians who seek leadership for self-gain, but have no commitment to the public good. Sometimes I am shocked by what some leaders say in public forums,” he said.

Uhuru said the unity of the Gema community is important and he will continue championing their interests.

He said elders from the association have already reached out to him to continue giving direction to the community.

“I would like to tell our people that I am only changing my State House address but I will still be much available," President Kenyatta said.

"I will interact with you and give my advice when there is a need and community elders will be giving me some assignments."

The head of state also spoke about the high cost of basic commodities, saying the government was taking proactive measures to cushion Kenyan households.

He said rising food prices are not just a local challenge, but a global problem caused by external factors and politicians should stop politicising it.

Uhuru further urged Kenyans not to be duped by cheap politics by his opponents.

He said Kenya has been using borrowed funds from international banks to build the economy and the administration has been paying interest without defaulting.

“This is not a Kenyan challenge alone. These are issues that are affecting every country in the world. We are trying our best to see how to make Kenya great and we haven’t defaulted," the President said.

He urged the Gema community to ensure it votes for anyone who will protect their interests. He said if the community fails to be united, they will be misused, despite their being the largest voting bloc in the country.

President Kenyatta has been supporting Raila whom he has termed an excellent successor.

During his rally in Murang’a on Saturday, the President urged residents to choose the best person to continue with his legacy.

He also praised Raila's running mate, Karua, whom he called a "consummate leader" who will fight corruption. He said while he has been merciful to rogue officials, under a Raila-Karua administration, all corrupt leaders will go to jail.

“Martha is a lady who doesn’t joke, and I am very sure she will not give all these corrupt leaders and looters a chance. They will be languishing in the cells. She is not like me who forgave them, Karua cannot forgive them," the President said.

Deputy President William Ruto has been requesting the President to stop endorsing Raila, claiming there is a plot to deny him (Ruto) the victory in case he wins.

Ruto said Uhuru has been frustrating him and his allies.

I have worked for Kenya to have peace - Uhuru

In his entire ten-year rule as President, Uhuru said he worked for peace.
News
1 month ago

Uhuru said he will experience the same problems as Kenyans.
News
1 month ago

May your will be done, Ruto tells God as he closes campaigns

He asked God to give President Uhuru long life.
News
1 month ago

I never chased anyone from government - Uhuru

Early this year, Ruto was officially kicked out  as Jubilee Party's deputy leader.
News
1 month ago

Rebutting his allegation, Uhuru said: "You have insulted me for close to three years. Has anyone touched you?"
News
1 month ago

“For the last three years, Ruto did not work… I am saying this with a clean heart. " - Uhuru.
News
1 month ago

Uhuru speaks to Mt Kenya ahead of Tuesday polls