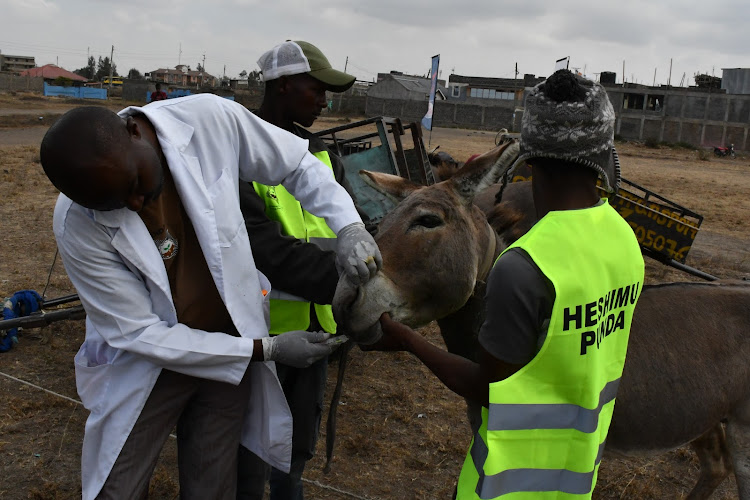 A veterinary officer from Kendat, a CBO that deals with donkey welfare, vaccinates and deworms donkeys at Stage 26, Ruai.
Image: JOHN KAMAU

Donkey owners have raised concern over the re-emergence of donkey theft and slaughter in several parts of the country despite government ban.

The owners, through Kendat, a Community-Based Organisation, said slaughtering of donkeys is illegal and anyone found should be prosecuted.

This comes after reports emerged that 15 donkeys were found slaughtered in Nyandarua and other parts of Machakos and Naivasha, forcing the owners to guard their animals at night from thieves.

Martin Mwiti, a representative from Kendat, said the trend may extend to other parts of the country if not curbed at an early stage.

“Farmers need to protect their donkeys against thieves because if you leave them to loiter around, they will be stolen and slaughtered. The thieves are remerging,” Mwiti said.

Nairobi Donkey's Organisation chairman Kamuiru Muthamia said farmers in the city cannot afford to lose the animals since they heavily rely on them to make a living.

He said since the government ban on the slaughter of donkeys, the population has slowly increased, and that every female donkey has a young one which is encouraging.

The farmers at the same time complained of lack of feed due to the ongoing drought, which has left their animals weak to the extent they cannot carry huge loads.

Joel Mwangi, who has five donkeys in Githunguri, Utawala, says the animals help him to supply water and construction materials. On a good day, he can make more than Sh6,000 from his animals.

However, the past few months have been difficult due to lack of feed. He now allows his donkeys to loiter around to look for feed.

However, this has made him get embroiled in cases of his donkeys trespassing into other people's farms and plots, forcing him to pay more than Sh10,000 to get his animals back from local chiefs.

Kasarani subcounty veterinary officer Judith Barasa said farmers flock to their office each week to report cases of their donkeys held after trespassing into other people’s farms and plots.

She advised the farmers to join groups not been affected by drought to help them to get feed, among other benefits.

“The farmers can use the groups to secure loans to buy farms for grazing their animals. They can also use them to seek veterinary support in case their animals are sick or have other problems,” the officer said.

Donkey traders rake in millions from industry despised as dirty

Lamu donkey owners make a minimum of Sh10,000 a day.
Counties
1 month ago

Why riding donkeys is taboo for Lamu women

Riding them has however been reserved for men and boys only.
Counties
1 month ago
by JOHN KAMAU Correspondent
Central
03 August 2022 - 22:00
Read The E-Paper