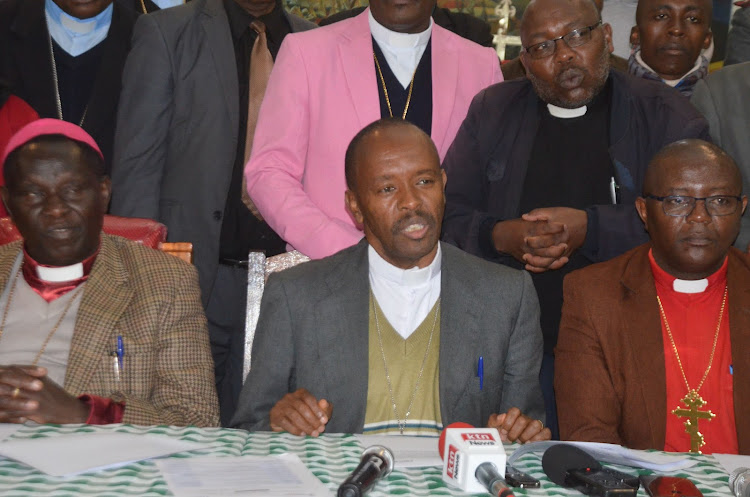 The National Council of Churches of Kenya Central region has appealed to President Uhuru Kenyatta and his deputy to stop attacking each other publicly and instead resolve their issues privately.

The council said the two leaders risk polarising the country should they continue directing salvos at each other in public forums.

The NCCK vice chairperson Central region Rev John Muhinya on Tuesday told journalists in Murang’a town it is the responsibility of the two leaders to ensure they facilitate peaceful election.

He said both leaders should rethink their stand and engage in activities that foster peace in the country especially with the history of tension that surrounds polls.

“When children cry, their mother and father cannot also start crying because it would throw the family into confusion,” he said.

Muhinya said it is a worrying trend that politicians continuously throw jabs at each other, which he said is dangerous and may prompt their supporters into violent confrontations.

He called on leaders, both nationally and in the county governments, to tone down their political rhetoric as they conclude their campaigns.

The reverend said it is important for all political camps to engage in campaigns with an open mind and with the knowledge that they may lose their desired seats.

The Independent Electoral and Boundaries Commission, he said, has announced having registered more than 16,000 candidates who are competing for about 1,835 positions, meaning a majority of them will lose.

“Why would a party get into such a competition with a predetermined mind of being the only bonafide winner? That is not the spirit of democrac,” Muhinya said.

He appealed to Kenyans to stop over investing their emotions in the candidates they support as it may lead to emotional distress should they lose.

The reverence also urged candidates not to invest too much financially in their campaigns to enable them pick the pieces and move on if they lose.

Winners, he said, should celebrate with grace and reach out to their competitors for a truce to incorporate their ideas in their development programmes.

“For those who win, remember this is a trust that the electorate will have placed on you to serve them,” he said.

He challenged the IEBC to conduct daily briefings in the remaining few days to inform Kenyans on the status of preparations.

As the clergy, Muhinya reiterated their commitment to undertake their role of advocacy, dialogue and meditation, saying they will take an active observation role and counsel election losers.

They also called upon Kenyans to turn out in large numbers and vote in leaders who have proven that they have integrity, and who have the right competence to solve their challenges.

The cleric asked the youth not to accept to be used by politicians.
Counties
2 weeks ago

NCCK and KCCB say they are ready to mediate the process.
News
3 weeks ago
“WATCH: The latest videos from the Star”
by ALICE WAITHERA Correspondent, Murang'a
Central
03 August 2022 - 22:00