Vote for me, my rivals don't have agenda, says Kang'ata 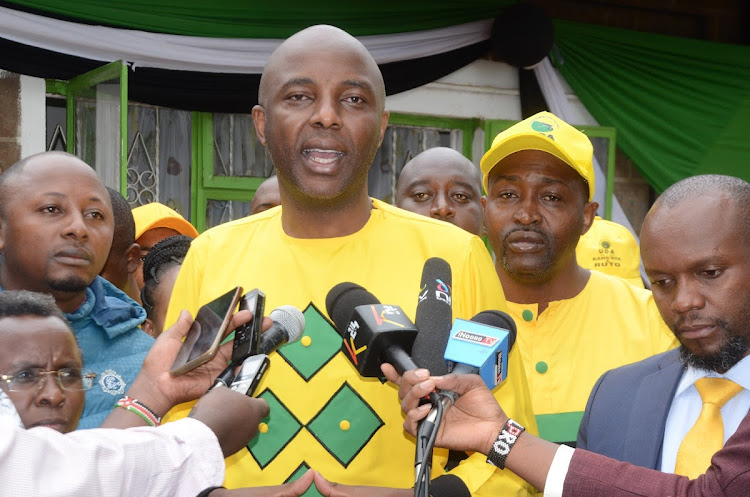 Murang’a Senator Irungu Kang’ata has urged residents to vote for him as the incoming governor, saying his rivals do not have an agenda that would take the agricultural county forward.

Kang’ata, who served as Kiharu MP in 2013 before he vied for senator in 2017, is vying against six other candidates for Murang'a's top seat.

However, Kang’ata, who held rallies across the county on Sunday, said he is the only candidate with a manifesto that will better the lives of residents.

He said his rivals have been copying his programmes and selling them as their own.

In a jibe seemingly directed at Kamau, Kang’ata said his competitors copied his free medical camps programme that he has been implementing since he was an MP.

Last year, Kamau organised more than 60 medical camps across the county that treated thousands of patients.

“They saw me do it and they started doing it. Why did they not start organising free medical camps five years ago?” he said.

Kang’ata, who is vying on a UDA ticket, pledged to ensure all public health facilities are equipped with drugs to ease the suffering residents have been undergoing as they are forced to get medications from private pharmacies which are expensive.

His administration will also ensure all vulnerable persons who are yet to register for National Health Insurance Funds services are enlisted.

Early Childhood Development and Education centres will be upgraded and tiled, he said, to provide a comfortable learning environment for children.

Kang’ata reiterated his commitment to ensure milk prices are increased from the current Sh40 per litre to Sh50 per litre through the establishment of a kitty that will help implement minimum guaranteed returns.

Majority of rural households that depend on either tea, coffee or avocado farming also practice dairy farming, both for consumption and sale.

Governor Mwangi wa Iria’s administration has consolidated farmers into Saccos, majority of which sell their milk through the Murang’a County Creameries.

But Kang’ata took issues with the measures that Wa Iria put in place to support farmers such as issuance of nappier grass, manure and arrow roots vines.

He said he would "take farmers’ contacts and send any form of support direct to them in terms of cash because I do not know the size of individual farms.”

“If I give you manure, you may not know from where I sourced it. It is better to support farmers in cash.”

Wa Iria and Kang’ata have clashed over the years as the outgoing senator criticised programmes implemented by the governor.

But Kang’ata told Gathinja residents in Kiharu constituency that he did not answer Wa Iria’s ‘insults’ and that he was just doing his job as a senator.

He also emphasised his commitment to establish a Ward Fund that will enable MCAs to participate in the development of the county in the wards.

Kang’ata, who served as the majority chief whip in the Senate before he was removed and replaced with Kiambu Senator Kimani Wamatangi, also told residents that he lost the prestigious position due to his commitment to tell the truth.

He said President Uhuru Kenyatta did away with him after he wrote him a letter telling him that the Building Bridges Initiatives did not enjoy the support of most Central Kenya residents and was bound to fail.

“My parents took me to church and told me to never lie and that is why when I read the BBI and found that it was wanting, I decided to speak out,” the senator said.

“My friends in politics told me to keep quiet and enjoy the big position that I was holding then, but I decided to be truthful."

Most preferred governor candidate in Murang'a

He claimed things got worse for Kenyans after the handshake.
Counties
2 weeks ago
by ALICE WAITHERA Correspondent, Murang'a
Central
01 August 2022 - 22:00