Governor James Nyoro, an Agricultural Economist, said his administration is determined to revive the coffee sector and make it lucrative for farmers in Kiambu

Kiambu Governor James Nyoro said high cost of farm inputs like fertiliser, infiltration of the coffee sector by cartels and lack of proper markets are some of the key reasons most farmers in the region were abandoning coffee farming 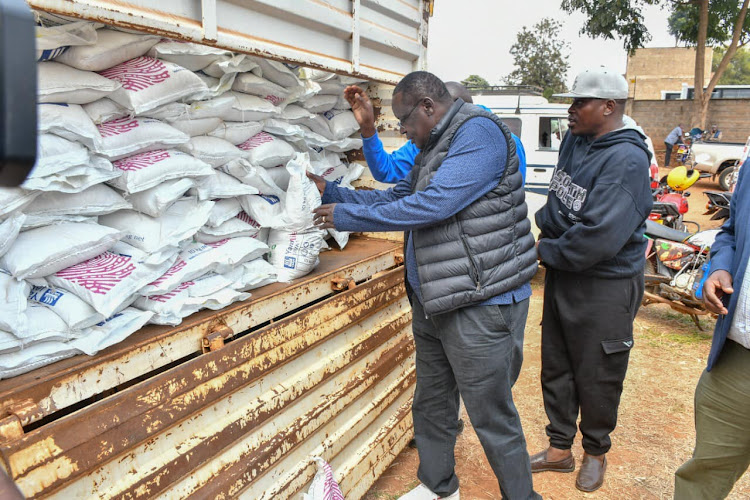 At least 10,000 coffee farmers in Kiambu County are set to benefit with 100 tons of fertiliser from the county government.

The free farm inputs, according to Governor James Nyoro, are aimed at boosting coffee production in the region and ensure the coffee produced is of high quality.

The Governor, who spoke while disbursing to the fertiliser, said that each farmer will receive 10 kilograms.

He added that farmers from the 22 coffee cooperatives in the region will benefit with the special blended fertiliser.

“Our aim is to increase the county’s coffee production while adhering to high quality of the cherries to enable them fetch better prices in the market. This is why we are distributing essential farm inputs to our farmers so that they can increase production and get high returns from their farming,” he said.

The county chief noted high cost of farm inputs like fertiliser, infiltration of the coffee sector by cartels and lack of proper markets are some of the key reasons most farmers in the region were abandoning coffee farming.

He lamented that despite coffee being one of Kenya’s top foreign income earners, most farmers have been languishing in poverty despite toiling hard in their farms only to reap low returns in a year.

Nyoro, an Agricultural Economist, said that his administration is determined to revive the coffee sector and make it lucrative for farmers in Kiambu.

“Coffee has been one of the top foreign income earners in the country for decades and it is one of the commodities that have made Kiambu what it is now. But the value for coffee has significantly declined due to a myriad of problems. We are keen to solve the problems and restore the sector’s lost glory,” he said.

While regretting that the county purchased lesser tons for farmers as compared to previous years due to procurement issues and lack of enough budgetary allocation, Nyoro who is seeking a second term in office, urged farmers to vote for leaders who are mindful of their welfare.

He insisted that farmers can only salvage themselves from years of economic turmoil by having visionary leaders who can champion their interests while in office.

The governor noted that his government will ensure farmers get the right farming information, inputs and market for their produce.

Kamau further pointed out that the county has rolled out a program that will see farmers have access to agricultural experts such as agronomists to facilitate them with crucial agricultural information dissemination that is key to increased production.

“We will be giving our farmers extensional services to ensure that they get knowledge on better farming practices. We have organised a pool of experts that will walk farmers the entire farming journey to ensure their land produces maximally for more earnings,” Kamau said

Farmers lauded the Kiambu County Government for the initiative saying that the farm inputs will go a long way in boosting their production.

“Our coffee will now fetch better prices due to availability of farm inputs as well as extension services from agriculture officers in the county. We are optimistic that our production will increase,” said farmer Margaret Muthoni.

Nyoro said that they are privy to a ploy by several Kenya Kwanza leaders to self-abduct.
Counties
2 weeks ago

Governor tells electorate to elect him for a full five-year term to realise his development plan
Counties
2 weeks ago
WATCH: The latest videos from the Star
by JOHN KAMAU Correspondent
Central
01 August 2022 - 15:35