Nyoro said that they are privy to a ploy by several Kenya Kwanza leaders to self-abduct.

•They said that the constant attacks and accusations against the Head of State are meant to ignite ethnic tensions in the country. 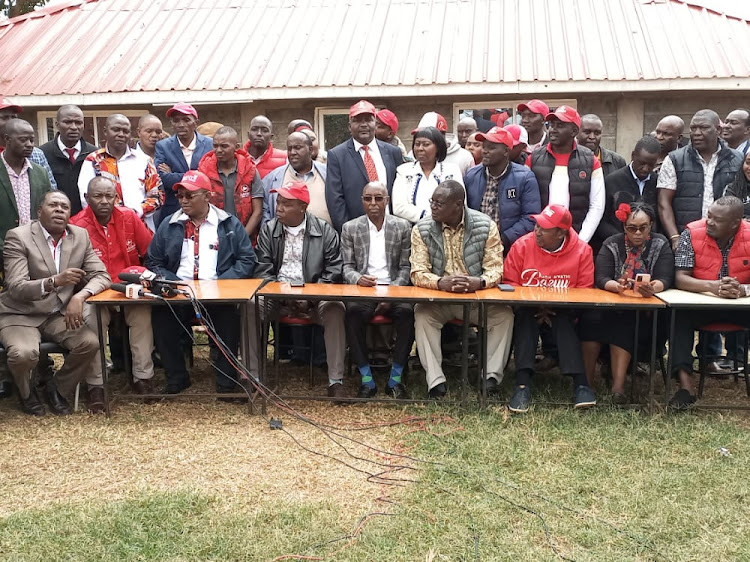 Leaders in Kiambu County have warned Kenya Kwanza leaders to stop making 'reckless' statements saying that they are brewing anarchy ahead of the general elections.

They said that the constant attacks and accusations against the Head of State are meant to ignite ethnic tensions in the country.

Nyoro in a press briefing on Sunday accused Ruto and Rigathi of whipping emotions and inciting Kenyans with an aim of amassing sympathy votes after sensing defeat in the upcoming polls.

“Our attention has been drawn to the recent constant attacks and defamatory statements by various leaders targeting the President. In Particular, Ruto’s statement that his life and that of his children are in danger of elimination is likely to cause ethnic tension as it happened in 2007,” Nyoro said.

“The reckless statements are incitement of the highest order and a clear indication that they have sensed defeat. The Kenya Kwanza camp is no longer seeking votes but whipping emotions and inciting members of the public. They are out to disrupt  the country’s peace.”

Nyoro said that they are privy to a ploy by several Kenya Kwanza leaders to self-abduct as the elections near so as to put the public in panic and seek sympathy.

“They now employ all crude tactics to rise to power. They have diverted the attention from campaigning to even attacking the President who is not even in the ballot,”  he said.

Limuru MP Peter Mwathi who is also the Chairman of the Departmental Committee on Administration and National Security called out the Deputy President for making utterances that could drag the country back to where it was after the 2007 general elections.

Mwathi said that the DP was insincere and is lying to Kenyans that he’s being threatened to say that he has not reported to the relevant authorities including the DCI.

“The DP is out to create ethnic tensions and animosity. He went to his home turf to announce that his life and that of his children is being threatened by the President.  All he was doing is whipping emotions and inciting his people. He knows too well that the results of his actions will be gracious and this is now a very serious issue,” Mwathi said.

He noted that after Ruto’s utterances were made, several leaflets warning a certain ethnic community to vote for him [Ruto] or face dire consequences have been recovered in several areas in the Rift Valley.

He however noted that the country's security apparatus is alert and will ensure that peace prevails during and after the elections.

“Even those claiming that their lives are in danger are heavily protected. Ruto himself has 174 security personnel including elite police guards,” he said.

Kiambu Town MP Jude Njomo said that they are aware of plans by the Kenya Kwanza leaders and especially in the Mt Kenya region to massively bribe voters during the elections. He called on the authorities to be vigilant.

“Their plans to rig the elections have been dismantled by the authorities. We are also aware that they are planning to buy and distribute liquor to areas where Azimio has a massive following. These are however kicks of a dying horse. They will lose miserably,” he said.

Njomo also said that the Mathira MP [Rigathi] is bitter with the President after losing sh 202 million, proceeds of graft, to the state.

Gladys Chania said that Kiambu leaders and residents will not tolerate the disrespect and attacks on President Kenyatta saying that “Uhuru is our son and we will stand with him. We as Kiambu women are saying enough is enough on the constant attacks on our son [Uhuru]”.

DP Ruto in his campaign trials has been accusing the President of threatening to rob him of his victory in the upcoming polls.

On the other hand, Rigathi while campaigning in Nyeri claimed that Uhuru has threatened to eliminate him saying that he is being trailed.

Other leaders in the Kenya Kwanza camp who have claimed to receive death threats from the Head of State include Gatundu South MP Moses Kuria.

"What will it benefit you to foment conflict amongst innocent Kenyans?"
News
2 months ago

" We have said we will respect and protect you in your retirement, it is only subject to your correct behaviour."
News
2 months ago
Post a comment
WATCH: The latest videos from the Star
by JOHN KAMAU Correspondent
Central
31 July 2022 - 21:50
Read The E-Paper