Bishops caution leaders against politics of hatred and division

They have been urged to desist from character assassination and avoid utterances that can cause anxiety and violence.

•They advised them to use a civic and established avenue of communication instead of making pronouncements in public.

•IEBC was urged to address legitimate concerns so they can protect the interest of the voters and clarify any allegations or misrepresentations. 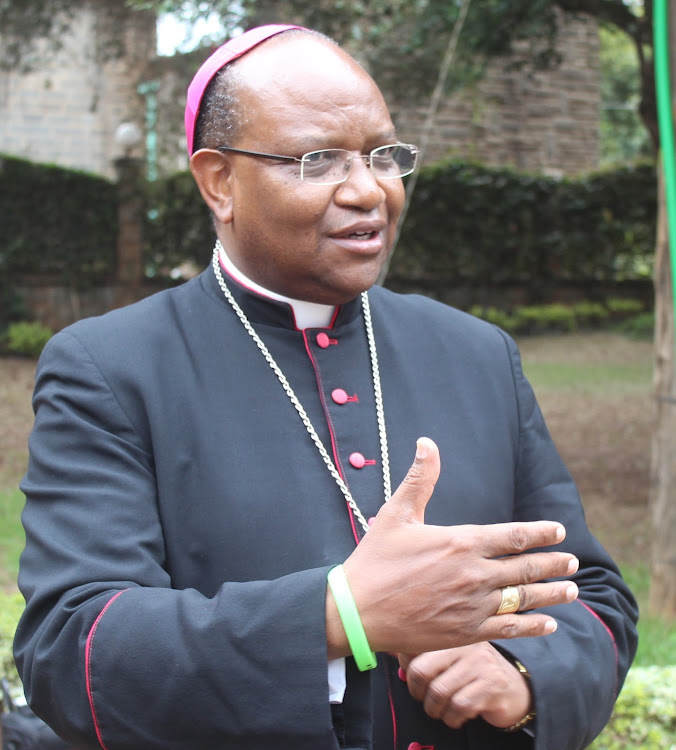 Kenya Conference of Catholic Bishops has urged politicians to desist from character assassination, use of demeaning posters and avoid utterances that can cause anxiety and violence.

In a statement read on their behalf by Nyeri Archbishop Anthony Muheria on Sunday, they said Kenyans need messages of peace through mature utterances but not hatred and division.

They called on citizens not to be abused, misused or misdirected saying every Kenyan had a duty to keep peace before, during and after polls.

Muheria spoke at the Consolata Cathedral in Nyeri town.

They encouraged Kenyans to turn out and vote; ensuring they do so wisely.

“With our vote, we have a say on who takes charge of our development agenda right from the ward to the national level,” they said.

Kenyans were advised to vote for people who will embrace their aspirations most practically.

“Lack of voting gives room for less qualified candidates including the corrupt and less worthy people to win seats that clearly should not,” they said.

They urged politicians and other players to address emerging issues to IEBC in a manner that is not antagonistic to their efforts to deliver free, fair and credible elections.

They advised them to use a civic and established avenue of communication instead of making pronouncements in public.

Independent Electoral and Boundaries Commission was urged to address legitimate concerns so they can protect the interest of the voters and clarify any allegations or misrepresentations.

“The government, political parties and all non-state actors involved in this process have a responsibility to offer protection and facilitation to ensure a fair, credible and transparent election. Every Kenyan has a civic duty to be proactive in delivering legitimate elections,” they said.

The bishops urged the winners not to develop a condescending attitude towards losers but to have modesty and respect for them.

Those who lose, they said, should concede graciously without causing chaos.

“Unmeasured celebrations or mayhem do not advance the democratic space we are enjoying. We, therefore, reiterate our earlier message that candidates should prepare their supporters for any results,” they said.

Regarding the cost of living, they said the promises being made by candidates cannot be realized within the proposed timeframe.

The high cost of living has become a major campaign agenda for politicians but the bishops told Kenyans that the major task of bringing down the living cost lies with them.

“They can achieve this through hard work and dedication in their skills, trade, profession, business and ventures,” they said.

“The promise Kenyans should seek from politicians, are those of an enabling environment.”

They said the issue needs well-articulated plans and interventions, otherwise, voters will be voting on false hopes only to be disappointed.

“We, therefore, ask each voter to assess critically the candidates who are better placed to improve our cost of living and vote for them. To the aspiring leaders, we ask for authenticity and truth,” they said

“Provide solutions that are realistic and not the lies of false promises. Solutions need smart strategies.”

All agreed to promote peace and discourage incitement and violence.
Counties
2 weeks ago

Gichana says alcohol and drug abuse may contribute to insecurity.
Counties
2 weeks ago

They have cautioned Kenyans not to elect leaders who thrive on incitement and misuse of youth.
Counties
1 month ago
“WATCH: The latest videos from the Star”
by EUTYCAS MUCHIRI Correspondent, Nyeri
Central
31 July 2022 - 23:00