He claimed things got worse for Kenyans after the handshake.

•Ruto asked locals to vote for UDA candidates and not to gamble with leaders who do not understand their challenges.

•He laid out power, roads and health projects that the Jubilee government has implemented in the county saying more would have been done were it not for the handshake. 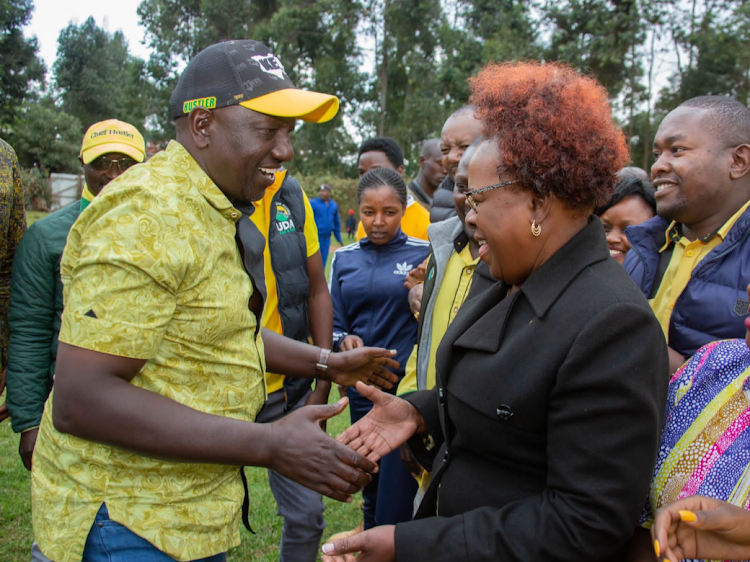 Deputy President William Ruto Wednesday took his campaigns to Murang’a County where he laid out the Jubilee government’s projects to woo voters to support him.

Ruto who visited Kangari in the Kigumo constituency and Gatura in Gatanga said the Jubilee government has tarmacked over 500 kilometres of new roads in the county since it was voted in 2013.

Ruto further announced that power connections in the county were increased from 45,000 to over 175,000 while technical and vocational education and training centres were increased to seven from just one.

“We came here with President Uhuru Kenyatta in 2013 to seek your support and we agreed that we would improve your health care. Now we have provided equipment worth over Sh. 500 million to Murang’a county referral hospital, Sh300 million to Maragua sub-county hospital and over 150 million to Kigumo hospital,” he said.

Ruto made a passionate appeal to locals to vote for him saying he has a plan to transform the government.

He said when they sought votes in 2013, both Raila and his running mate Martha Karua backed the cases lodged against them in the International Criminal Court (ICC) and wanted them jailed.

He said it is shocking that the President decided to back the same people.

With only a few days remaining before the general elections, Ruto led UDA leaders in campaigning for the party candidates in the county.

“We have agreed with your leaders that we will form a government that will put your interests first. A government that will lower the cost of living by supporting agriculture and ensuring it is profitable. Every farmer will produce enough food and earn more to eradicate hunger,” he said.

He claimed things got worse for Kenyans after the handshake between the President and Raila.

“I am pleading with you not to gamble with leaders who don’t understand your challenges,” he added.

The Kenya Kwanza administration, he said, will prioritize the creation of jobs for youths and will set aside Sh. 200 billion annually to sectors such as textiles, housing, leather and agro-processing to create employment.

He said the Jubilee government had a good plan for Kenyans when it incepted the Big Four Agenda but that the entry of Raila into the government disrupted it and redirected the focus towards the Building Bridges Initiative that later fell.

“It is good that it fell so that Raila knows there is a God who can stop reggae. Please make informed choices. Vote wisely and for a plan, not a slogan, and it is only Kenya Kwanza that has a good plan,” he added.

On his part, Kanga’ta asked Ruto to prioritize the dairy, tea and coffee sectors if he is elected saying majority of Murang’a households depend on them.

Maragua MP Mary Waithera said the Murang’a people want to ensure the 10 years that President Uhuru promised to Ruto are accorded to him.

He said it is time for Kenyans to send Raila to retirement, expressing confidence that Ruto will win.

Kiharu MP Ndindi Nyoro on his part promised to mentor, Munyoro, the Kigumo MP candidate, once he is elected and help him lobby for projects.

“Vote for Munyoro and I will hold his hand. He has been to Kiharu and seen that all classrooms are tiled and wants to do the same here,” Ndindi said.

Murang'a has been a Kenya Kwanza zone but has been softening towards Azimio La Umoja in the recent past as Raila's popularity in the Mt. Kenya region continues to slowly rise.

Independents wave not subsiding, if anything, it's energised after rebuffing Ruto.
Counties
2 months ago

Uhuru drums up support for Raila, tells Ruto to relax