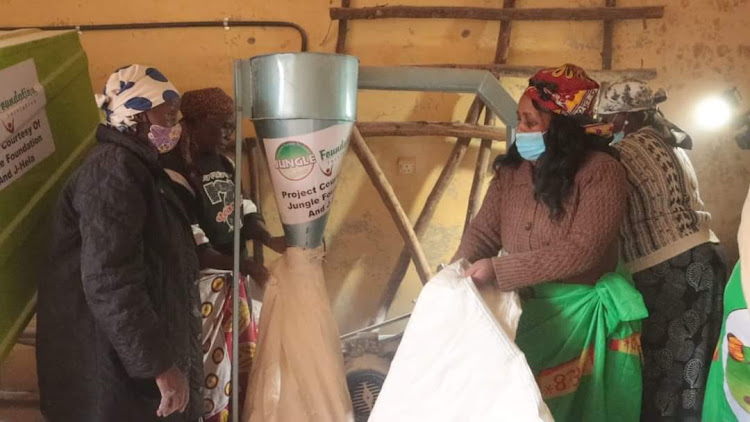 A group of elderly women in Kikuyu town, Kiambu county are reaping a fortune after investing in the manufacture of animal feeds for their poultry business and selling the surplus to local farmers.

The 30 women have managed to capitalise on the high demand for poultry feeds in the area and reduce the cost of production for their business.

They import raw materials like soya beans, cotton seeds, sunflower and maize from neighbouring countries which they use to manufacture feeds.

They began the enterprise with Sh10,000 which they saved in a sacco and after some time, they managed to secure Sh360,000 loan, which they used to purchase a milling machine.

Initially, they only focused on poultry farming but the business was not profitable due to the high cost of feeds before they decided to venture into value addition to cut costs.

According to the chairlady Grace Njeri Kimani, they used to make the feeds manually but it was ineffective and costly so they purchased a machine.

She said after production volumes picked up, they rented a bigger facility for milling and storage, where they pay a monthly rent of Sh10,000

The demand is so high that farmers make orders for supplies in advance.

Some 23 elderly women and 18 teenagers run the activities of the factory in shifts to meet the high demand.

Kimani said their journey was inspired by a training forum organised by the National Agricultural and Rural Inclusive Growth Project on food formulation, which made them realise the gap in the market.

“We saw a gap in the poultry feeds market which we exploited. The market is big but expensive, especially because we have to import most of the raw materials for the production,” she said.

They manufacture at least 400 kilogrammes of feed daily which they sell to local farmers at a cheaper price compared to those supplied by giant millers.

While the local market sells a kilo of the feed at Sh70, the women group sells for Sh50.

Susan Njoki Mucheru, a member of the group said since the establishment of the factory, their poultry business has improved.

She said despite their resolve, the market turbulence is threatening their business, by driving their production costs off the roof.

Mucheru said with necessary interventions and support, rural women have the capacity to drive the county's economy to unprecedented levels.

“We have realised that our county has a favourable environment to produce raw materials for making feeds. Soya beans, sunflower and maize do well in Kiambu and that’s why we ask to be facilitated with land for growing them,” she said.

She called on the government to help them expand the business by purchasing land to construct a bigger factory to supply feeds to the whole county.

Thika MP Patrick Wainaina, who helped the group secure the start-up loan said the women are keen to change lives if supported.

He said empowerment of organised groups is the best way to revolutionise the economy.

Wainaina, who is eyeing the Kiambu gubernatorial seat, said his government will work towards establishing more value addition opportunities to empower residents.

He said value-addition promotes the government’s agenda on manufacturing.

“The only way to revive this economy is by empowering the rural people through interventions that will keep them engaged and earning.  Most of them have brilliant ideas that if supported can accelerate development and create jobs,” Wainaina said.

The raw materials shall have been imported on or before October 31, 2022.
Business
7 months ago