• Nyoro said he raised residents’ concerns with President Uhuru Kenyatta, who promised to have the funds sourced for the footbridge.

• He said the project is at the procurement stage and is expected to be completed in six months. 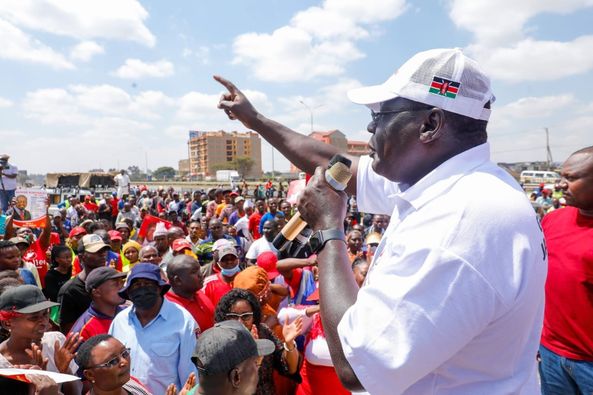 The government has announced plans to construct a footbridge at High Point in Juja to tame rising road accidents.

Residents have been raising concerns over escalating cases of accidents in which people have lost their lives and others sustained injuries while trying to cross Thika Superhighway.

Kiambu Governor James Nyoro visited the area on Tuesday accompanied by engineers from the Kenya National Highways Authority. He said the government has set aside Sh389 million to construct a footbridge.

The county chief said he raised residents’ concerns with President Uhuru Kenyatta, who promised to have the funds sourced for the footbridge.

“This project comes as a relief to thousands of residents living in Gachororo and High Point areas who were risking their lives crossing the Thika Superhighway. The President handled the matter with urgency when we raised it with him and the funds are intact and works will commence by the end of this week,” Nyoro said.

He said the project is at the procurement stage and is expected to be completed in six months.

The governor said speed bumps, rumble strips and a pedestrian crossing will be installed to ensure residents cross the road with ease before the project is completed.

“We have resolved to erect speed bumps to curb rampant accidents that have caused injuries and at times deaths to our people as they navigate across the busy road as we wait for the completion of procurement procedures to have a footbridge constructed,” Nyoro said.

KeNHA’s Eng Francis Gitau said the move to construct a footbridge was informed by the rising cases of accidents that have occurred in recent months.

“All procedures are being put in place and we expect to commence the construction works at the earliest possible. We too want to minimise the mishaps that have been occurring in this area,” he said.

A month ago, residents led by Juja MP aspirant Aloise Kinyanjui held a demonstration to protest the removal of speed bumps at the spot in December last year, which led to a rise in the number of people knocked down while crossing the busy road.

They said besides the deaths and injuries, many small businesses and boda boda operators had been adversely affected.

Kinyanjui on Tuesday thanked the President for promptly addressing the plight of Juja residents, saying even the businesses that had shut down would boom.

Residents who spoke to the Star welcomed the project, saying it was a godsend as it would ease movement.

“Our children schooling at Gachororo primary and secondary schools will no longer put their lives on the line while crossing the road. We have always been worried about their safety. We are grateful to the head of state for this noble project,” resident James Nzuki said.