Some propose to create harvesting schedule and provide uniforms for identification. 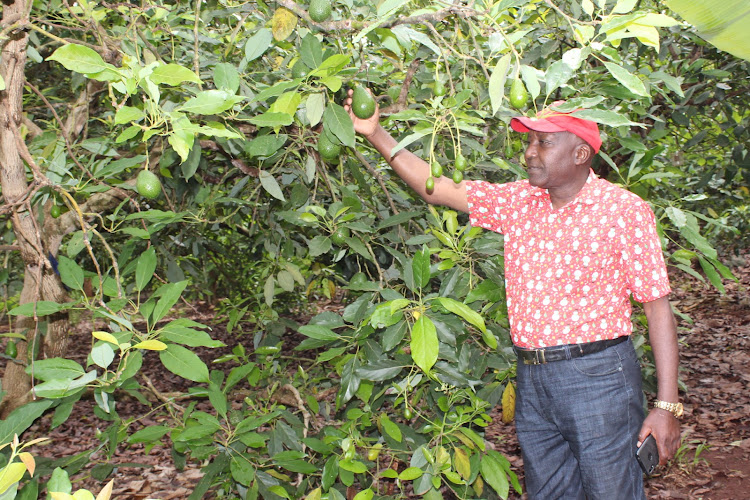 Candidates vying for Murang’a governor seat have blamed surging theft of farm produce in the county on youths’ joblessness.

Local farmers have in the last few years been decrying the rise in theft of avocados and coffee with some having to spend sleepless nights as they guard their crops.

Last month, Murang’a Avocado Co-operative Union chairperson John Mwaniki said the fruits are also stolen on Sundays when farmers are in church or when they are away from their farms.

Mwaniki laid the blame on brokers whom he said use youths to raid farms who end up harvesting even immature fruits.

On Monday, candidates eyeing governorship speaking during a debate organised by the Media Council of Kenya, said provision of jobs would stem such incidents as youths would not be available to steal.

Joseph Mbai, who is vying through Usawa Kwa Wote party, said there is need to stop brokers who buy avocados in kilogrammes instead of sizes.

The brokers fuel the theft by providing a market for the idle youths seeking quick money.

If elected governor, Mbai, who served as the Health executive since 2013, pledged to streamline the agriculture sector, especially the avocado subsector, by ensuring all buyers are compelled to buy fruits based on their sizes.

This, he said, will ensure farmers get paid more for bigger fruits.

Mbai also said he will create a harvesting schedule to stem immature harvesting and train harvesters who will be provided with uniforms for easy identification.

Former Devolution Principal Secretary Irungu Nyakera on his part said produce such as coffee are stolen as coffee co-operative societies do not have enough funds to protect them after harvesting.

Farmers from some of the co-operatives have had to go for seasons without pay after thieves break into their stores and make away with coffee worth millions, with an accusing finger pointed at managers who collude with private millers.

But Nyakera, who is vying through the Farmers’ Party, said his administration will provide a Coffee Enterprise Fund that will fund the co-operatives and help them improve their security preparedness.

“Through the fund, the co-operatives will be able to construct perimeter walls and watchtowers, and install power because some of them are yet to,” he said.

He hailed the measures put in place in the tea sector to stem theft, saying factories estimate an individual farmer’s production by calculating the average production of a tea crop multiplied by the tea bushes.

Nyakera also said he will create jobs for the youths to keep them from such crimes.

Moses Mwangi of Safina party pledged to work with the national government and other stakeholders to stem the theft.

“Most county governments have poor working relationship with the national government. I will work with security and community leaders to fight all forms of insecurity,” Mwangi said.

He said he will also establish Vijana na Kazi Mashinani programme that will take the form of the Kazi Mtaani programme being implemented by the national government to ensure many youths get jobs.

The governor candidate said the current situation indicates a failure in leadership.

Henry Gaate, an independent candidate, said he will focus more on enhancing the cultural practices that will ensure sufficient psychosocial support is provided to youths.

He said his approach will discourage youths from alcoholism and idleness, and empower them to take up their roles in the community.

“Men have abdicated their duties at home and left them to their wives. This has in turn caused confusion for young men,” he said.

His administration, he said, will start a marketing council charged with the responsibility of seeking markets for individual crops to empower local farmers.

He said he will also create jobs by establishing factories to add value to local products and establish a Sh200 million Wachuuzi fund to support small businesses.

Irungu Kang’ata of UDA on his part blamed security organs for failing to stem the theft and instead focussed on harassing youths.

“Theft is rampant in many areas. Security is a function of the national government ad is allocated a huge budget yet it has failed to protect farmers,” Kang'ata said.

“How is somebody able to get into farms, steal avocados and transport the loot all the way to the market without being detected? Where are the police?”

The MCK debate is the second to be conducted in the county this month with the first conducted by KBC weeks ago.

The six coffee co-operative societies will benchmark with successful co-operatives.
Counties
2 weeks ago

Mathenge maintained that his certificates are genuine contrary to earlier reports by the IEBC.
Counties
2 weeks ago

Pledge to conduct peaceful campaigns after a scuffle broke out between their supporters two weeks ago.
Counties
2 weeks ago
“WATCH: The latest videos from the Star”
by ALICE WAITHERA Correspondent, Murang'a
Central
21 June 2022 - 22:00