Says Mwangi will bring into his administration a wealth of knowledge and skills.

• Kang’ata said he picked Mwangi due to her vast experience in land matters.

• He said if they win in August, Mwangi will double as Lands executive so that she is ‘not reduced to a flower girl’. 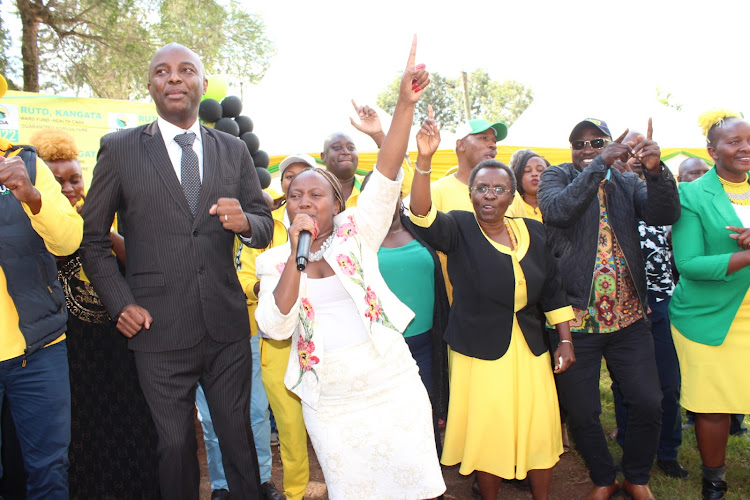 It is yet another win for women in Murang’a county after governor aspirant Irungu Kang’ata picked Dr Winnie Mwangi as his running mate.

Mwangi is a land economics expert who hails from Karagia village in Gatanga subcounty.

Kang’ata said he picked Mwangi, 50, due to her vast experience in land matters. He said she will bring into his administration a wealth of knowledge and skills.

Murang’a has been experiencing numerous land issues that have led to many cases of crime and even murders as family members scramble for land.

“Research indicates that only about 30 per cent of residents have land ownership documents because many have no information on how to file for succession while others suffer financial constraints,” Kang’ata said.

He said if they win in August, Mwangi will double as Lands executive so that she is ‘not reduced to a flower girl’.

With Mwangi on board, Kang’ata promised to issue more than 6,000 title deeds to locals every year if he is elected, 10 from each polling centre.

Mwangi currently consults for the government on land issues and was part of the taskforce that formulated the land regulations that are in operation. 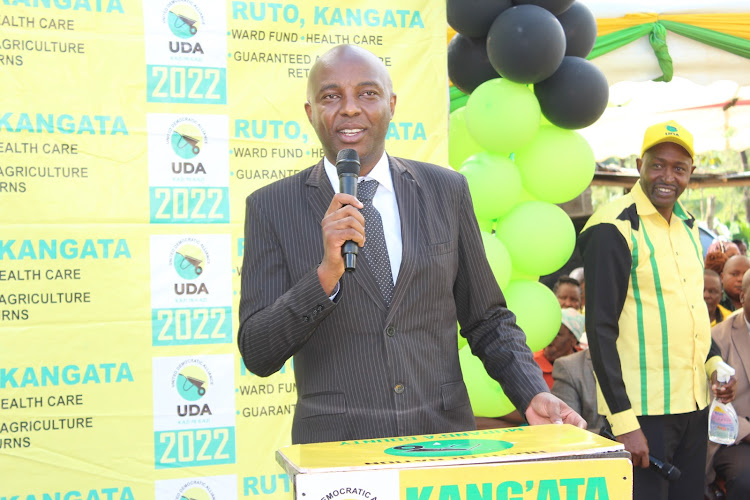 Kang’ata said the Lands department in the county has made it difficult for both locals and investors to construct buildings.

“This has chased investors away from the county but with Mwangi on my team, we will help streamline and modernise operations in the department to make it more efficient.”

“She is a born again Christian with good morals and will help straighten me up when I go astray as she is older than I am,” he said.

Two weeks ago, women from Gatanga said they would rally behind governor aspirants who pick women as running mates.

“When I was looking for a running mate, I was impressed to find that she was already a member of UDA party because most of the others were not. She was also from Gatanga and I had made a pledge to pick a professional from the subcounty,” Kang'ata said.

Mwangi said she was surprised when Kang’ata approached her.

She said she never thought she would participate actively in politics.

Mwangi said she was impressed by Kang’ata’s humility and his continuous fight for the downtrodden in society.

She told supporters who had gathered at her parents’ home in Gatanga that Kang’ata’s team needed the support of professionals like herself.

Mwangi expressed concerns that processing of title deeds in the county takes years, which is punitive for families and lock them out of credit services.

“Without land ownership documents, many are locked away from loans and suffer to get sureties in courts,” she said.

“We will partner with the National Land Commission to clean up the lands registry. We will go to the grassroots to sensitise people on the succession process. I assure you that you are in safe hands.”

Naomi Kagone holds degrees in education and international business studies from Kenyatta University and USIU, a master’s degree in science and a doctorate degree in entrepreneurship.

This is largely seen as a win for the fight to have more women in leadership positions in a county that has three elected women MPs. Dr Winnie Mwangi gives her acceptance speech after she was picked as Irungu Kang'ata's running mate on May 7, 2022.
Image: Alice Waithera

Women want Murang'a governor aspirants to pick them as deputies

Say as caretakers of their homes, they have proven beyond doubt they can keep families together
Counties
1 month ago

The women want the DP to pick Kandara MP Alice Wahome as his running mate.
Counties
4 months ago
“WATCH: The latest videos from the Star”
by ALICE WAITHERA Correspondent, Murang'a
Central
08 May 2022 - 22:00