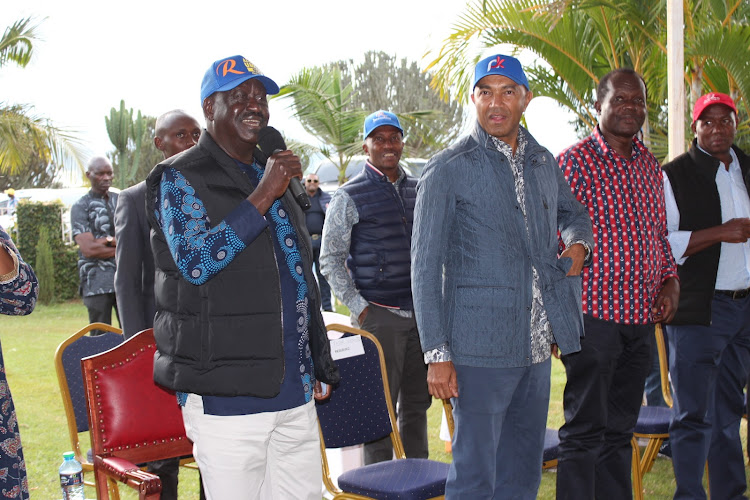 Raila Odinga with Peter Kenneth, Raphael Tuju and Ndiritu Muriithi during a meeting with Murang'a aspirants on May 3, 2022
Image: ALICE WAITHERA

The strategy is meant to strengthen the coalition in the Central region.

On Tuesday, Raila met aspirants from Kiambu and Murang’a counties separately, appealing to them to stick with the outfit, promising them they will be awarded for their loyalty.

While addressing the aspirants at Thika Greens hotel in Murang’a, Raila announced that he would hold similar meetings in Nyandarua and Nakuru counties later in the week.

He said despite losing in the nominations, aspirants were still in the ‘winning team’, and that the Azimio government would have numerous job opportunities for them if they continued to support it.

Azimio is facing stiff competition from the Kenya Kwanza Alliance in the county, with the face-off mainly being between Jubilee and UDA.

“I am not here as the ODM candidate. I am here as the Azimio La Umoja candidate and you are my foot soldiers. We want to get seats from the MCA to the president,” Raila told them.

He asked local leaders to form committees in the wards, constituencies and the county to popularise the alliance and seek votes for him.

The county committee, he said, will work with the presidential campaigns secretariat which he said requires support from the grassroots to be successful.

The foot-soldiers will be facilitated to carry out campaigns, with Raila expressing confidence that he will carry the day as he enjoys the support of most regions in the country.

“Even if you did not get a ticket, know that you are in the right team. We agreed to sit down with the President to bring the issues of tribalism that have been affecting the country for decades to an end," he said.

The coalition comprises 26 parties that have come together in a bid to pool votes.

With certain parties enjoying more support in some areas than others, Raila said the coalition will conduct opinion polls to determine the strongest aspirants who will represent it effectively.

An aspirant like Pius Kinuthia who is vying for the Senate seat through ODM, and was presented with a ticket last week, may have to step down in favour of a stronger aspirant such as Kembi Gitura who is vying through the Jubilee.

Raila said the alliance needs to have the majority of MPs in both Senate and the National Assembly to help his administration work well. 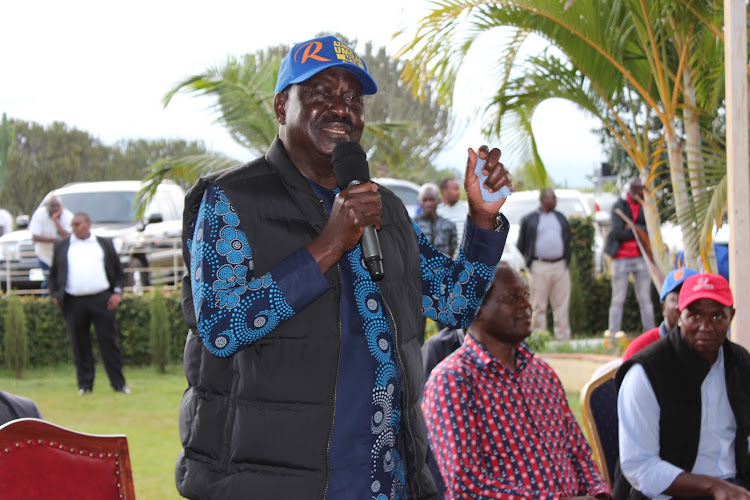 “The Jubilee government is only able to work efficiently because of the partnership with ODM,” he said.

He further said his campaign secretariat will release the Azimio manifesto in the next two weeks to aspirants to help popularise the outfit.

Former Gatanga MP Peter Kenneth on his part assured Raila of support from residents, pledging to carry out an intensive campaign in the villages.

“Raila has the support of most parts of the country. The only area with a small challenge is Central and we will work on it,” Kenneth said.

Kenneth pledged to help organise forums in the constituencies in partnership with other leaders in a bid to neutralise UDA.

Murang’a Woman Representative Sabina Chege said the alliance will help aspirants with the production of posters and will also come up with a central branding area.

The matatu sector, she said, has also agreed to support Raila by branding vehicles for free across the country.

“We must deliver majority of MPs and senators so that Raila is not elected without support,” Chege said.

Azimio manifesto likely to be unveiled next week - Raila

Raila said he will deal firmly with the high cost of living.
News
3 weeks ago

The Azimio presidential aspirant recently formed a committee to advise him on who is best suited to deputise him.
Counties
3 weeks ago

ODM is the most popular party followed by UDA, according to Tifa poll
News
3 weeks ago
“WATCH: The latest videos from the Star”
by ALICE WAITHERA Correspondent, Murang'a
Central
04 May 2022 - 22:00