•He was however disappointed that he was not able to view the body. 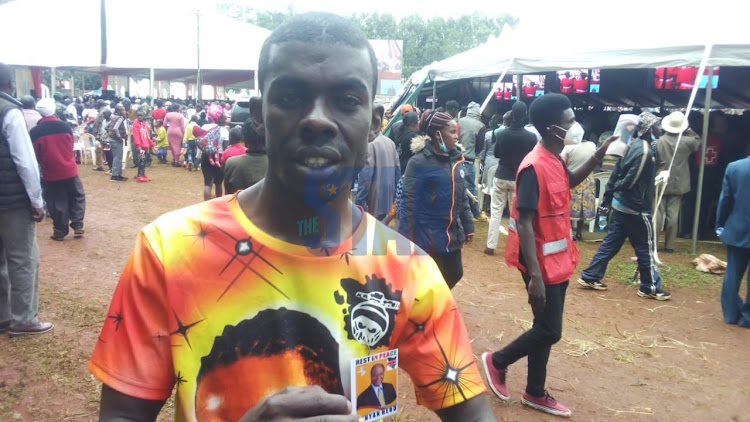 Josphart Socha Nyata said he left Kisii at 10 pm Friday and arrived in Nyeri at around 9am Saturday.
Image: EUTYCAS MUCHIRI

A boda boda rider on Saturday said he had travelled on his bike from Kisii County to Othaya in Nyeri County to attend the late President Mwai Kibaki's funeral.

Josephat Socha Nyata said he left Kisii at 10 p.m. on Friday and arrived in Nyeri at around 9 a.m. Saturday.

He said he attended the burial to pay his last respect to the former president, following the development projects he initiated all over the country when he was president.

"He is the president who brought down levies and taxes on motorbikes enabling us to own boda-bodas thus creating employment for the youth," he said told the Star.

"I am earning a living from the bodaboda industry courtesy of him. Probably I would be unemployed today," he said.

He said he now has a story to tell after returning back to Kisii adding that his presence makes him feel that Kisii people are well represented in Nyeri.

Socha said he was shocked to see how Kibaki was loved by Kenyans who came from all over the country to bid him farewell.

He was however disappointed that he was not able to view the body.

"I thought people here would have been accorded a chance to view the body," he told the Star.

About 15000 people were expected to attend the event but the number of mourners seems to have exceeded the target.

At the burial site, the clergy took the lead and conducted prayers.
News
3 months ago

Uhuru, Ruto arrive in Othaya ahead of Kibaki's burial service

At the time of their arrival, Kibaki body had reached Mukurweini, Nyeri county.
News
3 months ago

Kibaki’s body arrives in Othaya ahead of burial service

Kibaki's body left the Lee funeral home in Nairobi at 7 am arrived past 10 am expected time.
News
3 months ago

50 religious leaders from other faiths and denominations are expected to arrive.
News
3 months ago

Some people arrived at the venue as early as 5a.m
News
3 months ago
local : “WATCH: The latest videos from the Star”
by EUTYCAS MUCHIRI Correspondent, Nyeri
Central
30 April 2022 - 12:13