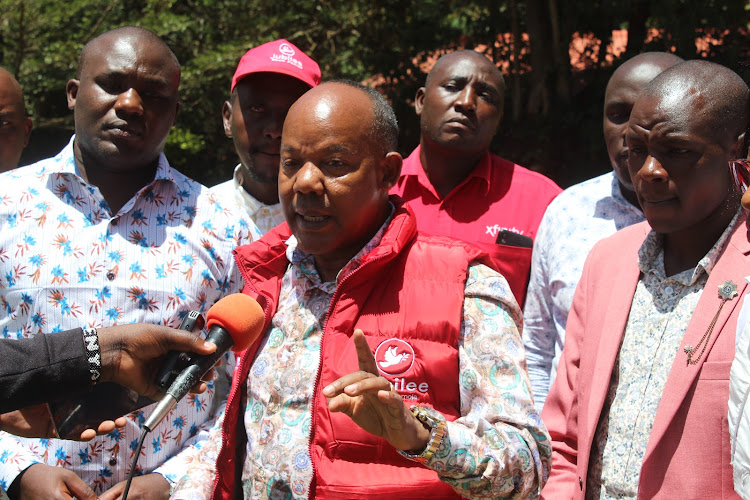 Changes in Jubilee leadership which saw two major positions given to Mt Kenya region have rejuvenated the party in the region, a party official said.

On Saturday, Jubilee aspirant caucus chairman in Nyeri county Gachara Kamanga said many serious aspirants have joined the party since the NDC.

He described Kioni as a person of high integrity, patriotic and interested in the well being of Mt Kenya people.

Kamanga, who is Nyeri governor aspirant said many people are happy with Kioni and Kega's appointment.

“Kega is also vibrant and has shown leadership and he is firm in his political decisions,” he said.

He said people who had earlier joined UDA and other parties have started changing rejoining Jubilee following the spirited campaigns that have been mounted by the party.

He said the youths have seen the light after their rivals lies were debunked by President Uhuru Kenyatta during his Sagana III meeting in Nyeri.

Kamanga spoke at Annabelle Hotel in Nyeri town during a consultative meeting with over 50 Jubilee aspirants vying for various seats.

Kamanga said the caucus was formed after the party’s NDC to market Jubilee in the county.

He said the party has already informed residents that its nomination will be a fair and credible.

Mercy King’ori, an MCA aspirant in Dedan Kimathi ward echoed Kamanga’s sentiments saying the changes have revamped the party at the  grassroots.

Vote for Jubilee to protect your interest, Mt Kenya told

Say they need to represent Uhuru's interest for Mt Kenya in the next Parliament.
Counties
3 months ago

Tuju hands over to Jeremiah Kioni as Jubilee secretary general

The ceremony took place on Friday at the Jubilee Party headquarters in Pangani, Nairobi.
News
3 months ago

Given the go-ahead by the President to reenergise the once-formidable party.
Counties
3 months ago

Karimi says they are forced to dig deeper into their pockets to run office errands
R.Valley - Page 30
3 months ago
“WATCH: The latest videos from the Star”
by EUTYCAS MUCHIRI Correspondent, Nyeri
Central
07 March 2022 - 22:00