The Head of State arrived at the meeting at12:30 pm.

• The President will address thousands of his supporters who expect him to give a clear political direction for the region.

• The President has in the past indicated that he would back the former Premier. 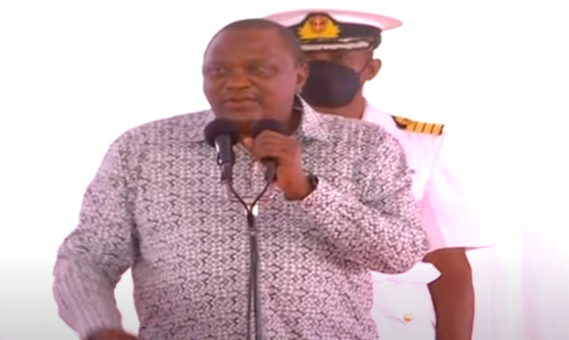 President Uhuru Kenyatta has arrived for the Sagana III meeting at the Sagana State Lodge in Nyeri.

The Head of State arrived at the venue of the meeting at 12:30 pm.

The President will address thousands of his supporters who expect him to give a clear political direction for the region.

Uhuru is expected to endorse ODM leader Raila Odinga for president and give reasons behind his choice.

The president has in the past indicated that he would back the former Premier.

Nyeri Town MP Ngunjiri Wambugu and Kieni's Kanini Kega said his supporters are ready to do what the president will tell them.

"Those claiming the president will have no influence in the forthcoming elections will be in for a rude shock," Kega said.

Kega added that the President will turn tables on his deputy William Ruto in the next few months.

Wambugu, on his part, said the president is moving in the right direction by taking an active role in his succession.

He said the residents want the Uhuru's successor to complete ongoing projects in the region.

The MP said the head of state will also debunk lies politicians were spreading in the region.

“One of the major lies they have been telling us is that the deputy president (William Ruto) has been working with the president. They have pushed that lie for the last three years,” he said.

This is the first time the Sagana meeting will take place in his absence.
Counties
4 months ago

Chaos outside Sagana State Lodge ahead of Uhuru meeting

The President is expected to chair 'Sagana III' meeting.
Counties
4 months ago
WATCH: The latest videos from the Star
by EUTYCAS MUCHIRI Correspondent, Nyeri
Central
23 February 2022 - 12:57