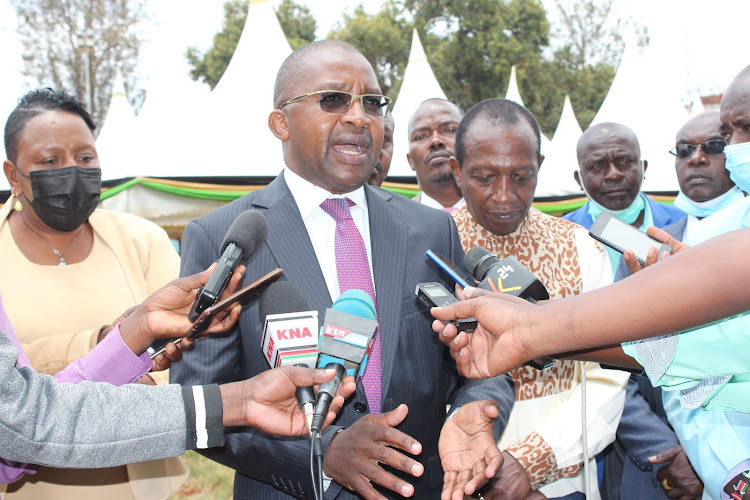 Murang’a Governor Mwangi wa Iria's administration could be in a spot after revelations of opaque and irregular procurements that have dogged his government.

Auditor General Nancy Gathungu has exposed massive procurement flaws and disregard of the law by officials in the awarding of multi-million shilling tenders.

The disclosures are contained in the financial audit report of Murang’a county executive for 2019-2020.

According to Gathungu's report, the county executive has not adhered to transparency in procurements, thus putting into question the value of the money in the award of the contracts.

“As a result, transparency, fairness, equity, and value for money in its procurement activities could not be confirmed,” Gathungu says in the report.

The auditor disclosed that during the fiscal year, the devolved unit failed to adopt e-procurement and did not prepare and publicise all contract awards as required in law during the year.

“Further, monthly progress reports on all procurement contracts prepared and submitted to the accounting officer, as prescribed in Section 152 of the Public Procurement and Assets Disposal Act, 2015, were not provided for audit,” the report reads.

In addition, there was no report made to the PPRA on procurement preferences and reservations to show the county executive’s compliance with Section 157(4) of the Public Procurement and Assets Disposal Act, 2015.

The provision requires reporting by each public entity on the number of youth, women and persons with disabilities whose goods and services the entity procured in the reporting period.

Further, the county executive of Murang’a did not submit to the auditor general quarterly financial reports and monthly bank reconciliation statements for each account held by the county as required by law.

Gathungu exposed how the county executive hand-picked firms and awarded them multi-million shilling tenders without subjecting them to a competitive process.

For instance, the county awarded a tender to two service stations for supply of motor vehicle fuel.

However, there was no evidence indicating that the two suppliers were subjected to a competitive procurement process as required by law.

“As a result, the regularity of the expenditure totalling Sh9.05 million could not be confirmed,” the report reads.

The county also awarded a Sh7.46 million contract to a firm for bookings and air tickets for senior management who travelled to foreign countries during the year under review.

The supplier was identified through direct procurement (single sourcing) contrary to Section 104 of the Public Procurement and Assets Disposal Act, 2015.

“As a result, the expenditure was irregular and value for money on the spending could not be confirmed,” Gathungu held in the report.

The county expended Sh112.94 million grant it received from the Ministry of Health for use in mitigating the effects of the Covid-19 pandemic without an approved budget.

“As a result of these anomalies, propriety and validity of the payments totalling Sh37.56 million spent on Covid-19 mitigation activities could not be confirmed,” the auditor noted.

Executive Order No.6 of May, 7, 2015 directed all public entities in national and county governments to fully implement end-to-end e-procurement processes within two weeks from the date of the circular.

Further, Executive Order No.2 of 2018 directed that by January 1, 2019, all procuring entities were to undertake all their procurements through the government e-procurement module.

“However, review of the procurement activities of the county executive indicated that some open tender advertisements and all payments were done through the IFMIS system while other procurement processes were done manually outside the system,” the report reads.

In addition, procurement through restricted tender and direct procurement, opening of bids, tender evaluation and award of tenders were all done manually.

“The county is therefore in breach of the Executive Order on the implementation of e-procurement,” the auditor said.

EACC seeks to forfeit the bribe and properties.
News
10 months ago
Post a comment
WATCH: The latest videos from the Star
by JULIUS OTIENO Journalist, Political and Parliamentary Reporter
Central
03 February 2022 - 22:00
Read The E-Paper