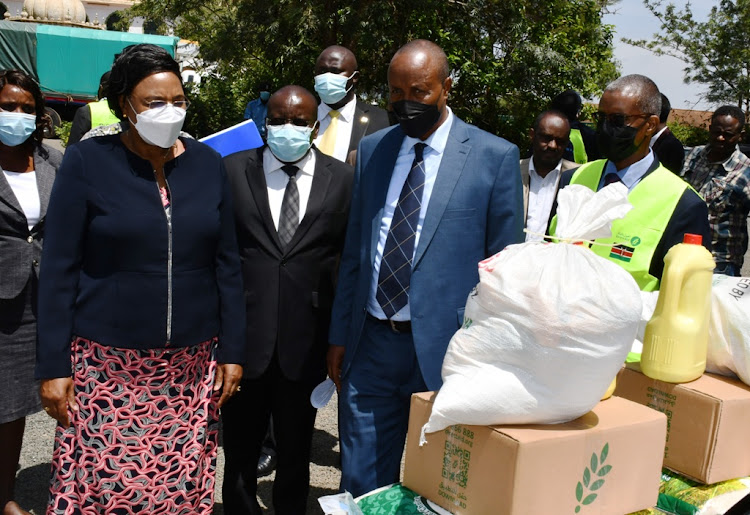 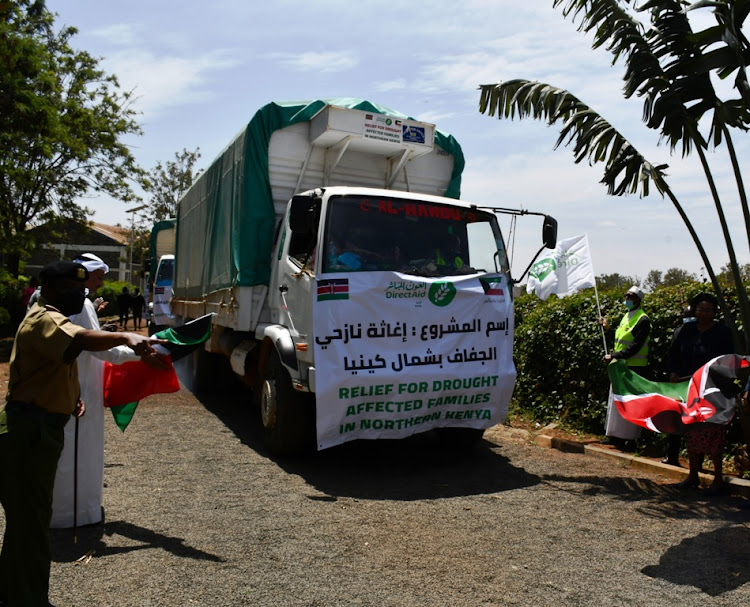 At least 2.5 million Kenyans are in dire need of relief food due to the drought situation in the country, Public Service CS Margaret Kobia has said.

She said the prolonged lack of rains in several parts of the country, especially the arid and semi-arid lands counties, has pushed many Kenyans to the jaws of hunger. The CS said the government is taking appropriate measures to ensure no Kenyan dies of hunger.

Kobia was speaking in Thika town on Monday while flagging off 340 tonnes of food supply from the Kuwait government. The food will be distributed to 6,400 families in 23 counties that have been extremely affected by drought.

Among the food items distributed include rice, cooking oil, maize, sugar and flour.

“We have counties like Marsabit, Wajir, Moyale, Garissa, Turkana, Baringo, Samburu, Tana River and Isiolo which have been worst hit by the drought," she said.

"We will ensure food rations reach the target beneficiaries to help them cope with the hunger as we seek lasting solutions to this problem.”

The CS said the government is working round the clock and closely with Kenyans of goodwill, development partners and embassies to make appropriate interventions to counter drought that was declared a national disaster by President Uhuru Kenyatta last year.

“The drought in the country is serious and is a matter of national concern. This is why we are appealing to well-wishers, NGOs and other nations, which we enjoy good bilateral relations, to chip in their support. We will ensure no one perishes due to hunger,” Kobia added.

She said some of the interventions the government has made include the release of Sh8.5 billion this month towards vulnerable families through the Inua Jamii programme.

“The government also released about Sh400 million as bursaries to children in boarding schools, especially in Form 1 and who have not been able to pay their school fees because of poverty. Also, some Sh13 million has been given towards nutrition to children in ASAL counties,” she said.

The CS said the Kenya Meat Commission has been given the necessary resources to undertake livestock uptake in drought-stricken regions to reduce the risk of livestock deaths.

Kobia said the animals will be slaughtered and distributed to Kenyans facing starvation. She urged pastoralists to sell their animals to avoid losing them to drought.

The CS said the government is also working to have resilient programmes to reduce perennial reliance on relief food in such areas.

“Some of the programmes initiated include drilling boreholes for irrigation, having a drought fund to help in interventions, putting up irrigation schemes, connecting residents to roads and electricity as well as having a school feeding programme in the ASAL regions,” she said.

Kuwait Ambassador Qusai AL Farhan said the bond between the two countries is strong and they will offer more assistance if needed.

“We responded fast to the request by President Kenyatta to help Kenya mitigate the effects of drought. We didn’t hesitate because even Kenya assisted us when Kuwait was in need. Our relation with Kenya is very strong.”