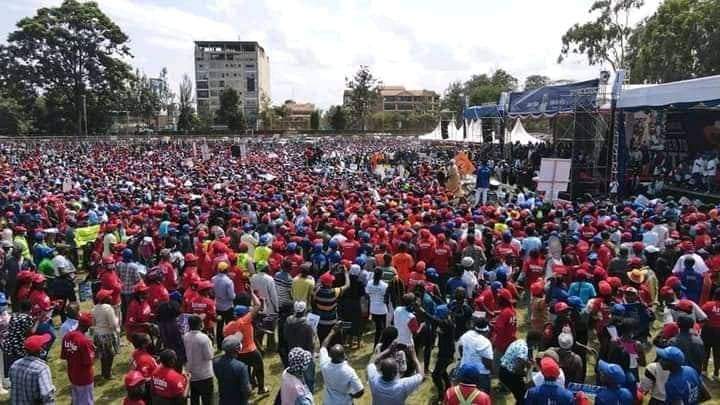 The first Azimio la Umoja rally held in Thika, Kiambu county last weekend was a great success, according to its organisers.

The meeting was dubbed Azimio Mtaani Rally, the pioneer of other meetings to be replicated across 46 counties in the country.

According to Kiambu governor James Nyoro, the rally was very well attended by local leaders.

More than 60 members of the country assembly, all Azimio associated members of parliament from the county and other grassroots leaders.

The governor said discussions at the meeting opened the eyes of the residents on the new partnership between the people and their leaders in solving issues.

Azimio la Umoja was explained as a handshake involving all Kenyans with the sole objective of inclusivity to ensure everybody is adequately motivated to participate in the affairs of the movement.

Where in most political meetings leaders preach down on the people on what they want to do for them if capture power, the Azimio meeting gave the residents a chance to articulate issues they felt were of concern.

The issues were then discussed in the public forum and solutions recommended.

“In essence, the meeting sought to practically play out the handshake where all Kenyans join hands to resolve their political, economic and social issues,” said Nyoro.

Former Prime Minister Raila Odinga and other leaders, who spoke, were keen to interact with the challenges facing the residents and used the ten point Azimio agenda to demonstrate how these can be tackled.

While the people of Kiambu put their issues on the table, the leaders emphasised that Kenyans, were partners in Azimio and would therefore be involved in solving their own problems.

"They will be partners who will be involved in the resolution of the problems they have," added the governor.

In Kiambu, the issues that Azimio will prioritise include under-representation in a densely populated county and the consequent unfair revenue allocation.

Two meetings were held in Kiambu starting with the town hall one where Raila met and had discussions with various leaders from the county and other stakeholders.

These groups pointed out their daily challenges and asked the Azimio leaders to forge ways of making their work easier and financially viable.

Through the explanations that came from the former prime minister and other leaders at the meeting, these groups were happy to note that Azimio agenda sought to address their issues, but they also sought assurances of Azimio's commitment to their pleas.

Instructively, the Thika Azimio meeting was organised in a way that all felt included, but the number of speakers was scaled down.

There were few speeches by local leaders and these were reduced to only a few minutes.

The organising committee of the meeting was composed of the governor, Kiambu Azimio Members of Parliament, representative of the national executive, professionals, members of the business community, religious leaders and representatives of local interest groups.

In the electric public rally at Thika Stadium over 10 thousand people attended.

Lawmaker had ferried supporters to cheer him up and jeer opponents.
News
3 months ago

All systems go for Raila's presidential bid launch in Thika

Raila will be launching his presidential campaigns in Mt Kenya region for the first time.
News
4 months ago
by BY STAR CORRESPONDENT
Central
23 January 2022 - 22:00