•The group’s president Pastor Grace Godfrey said most patients are from poor backgrounds and affording a proper meal a day was hard.

•Ministry of Health urged to consider and prioritise the idea to zero-rate the number of patients abandoning their anti-retroviral regimens. 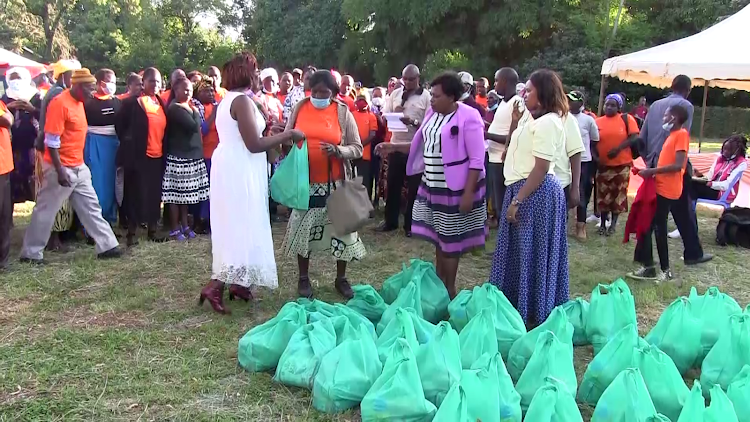 A lobby has petitioned the government to roll out a programme to provide food to HIV patients in the country.

Grace Sufficient International, an NGO that assists persons with HIV/AIDs said most patients are abandoning their medication due to a lack of food and a proper diet.

The group’s president Pastor Grace Godfrey said most patients are from poor backgrounds and affording a proper meal a day was hard.

She spoke on Saturday at Gathage village in Gatundu South, Kiambu, while distributing food rations and Christmas hampers to over 300 HIV patients from Kiambu, Kirinyaga and Embu counties.

“We appreciate the government for ensuring the efficient provision of HIV drugs to patients. However, the patients require a proper and balanced diet to cope with the strong medication,” she said.

“We plead with the government to consider initiating a programme to aid the patients with food rations that will boost their health and enable them to take their medication.”

Godfrey said the government has enough resources to initiate and sustain such a programme monthly.

She called on the Ministry of Health to consider and prioritise the idea to zero-rate the number of patients abandoning their anti-retroviral regimens.

“These drugs are very strong and if the patients take them without having proper nutrition their immune system will weaken posing a major peril to their health,” she said.

Godfrey said children who have been affected are facing health perils due to a lack of proper nutrition. Most of the children are orphans and when they approached her, they wanted food.

Mary Nyaga, an official said the NGO has been assisting persons living with HIV in the country by counselling them and providing food rations.

“We only provide them with food once per year due to financial constraints.  Most of them require support from the Government. They need a balanced diet,” Nyaga said.

She called on like-minded partners to join hands with them to make their pursuit of helping HIV patients sustainable and to reach out to more in the reserves.

“We know there are so many patients in the reserves who are suffering in silence. These are the people we want to reach out to but we are held back by financial limitations. We are pleading with more corporates to partner with us for this noble course,” she said.

Some of the patients who spoke to journalists echoed the NGO’s sentiments saying the strong anti-retroviral regiments take a toll on them whenever they miss their meals.

They called on the government to provide them with food supplies.

“Taking the drugs when hungry makes one dizzy and very weak. The drugs are very strong. The programme will be of great help to many patients who cannot afford a meal in a day,” one of the beneficiaries said.